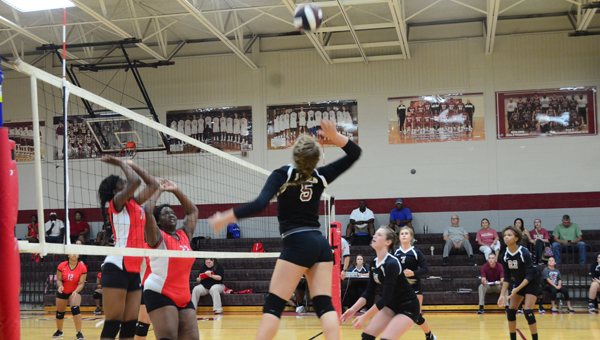 The Shelby County Wildcats’ volleyball team is off to a 12-2 start on their season and look to continue their success with a tough slate of matches ahead. (Reporter photo/Alec Etheredge)

COLUMBIANA – The Shelby County Wildcats’ volleyball team is off to a 12-2 start after a big 3-0 weekend at the 2016 JHS Panther Round Robin tournament in Jemison.

The Wildcats started their season on the wrong foot with a loss to Calera in their opening match, but reeled off nine wins in a row after that to take their record to 9-1. Their next loss came to Briarwood on Sept. 8, but just like their first loss they rebounded nicely with three wins in a row.

“They fight hard, we’ve been behind in almost every set we’ve played this year,” said head coach Jamie Creekmore. “They start really slow, but then they come back and fight hard.”

Creekmore mentioned one match in particular when his team hosted a 10-0 Isabella team earlier this year. Shelby County was down in the match two sets to one and trailing 13-2 in set four before they came back to win that set and then take set five 15-5 for the win.

“We have one or two servers that when they get up there it just really gets our team going and the fact that game was at home really helped because our crowd got into it once we started the comeback,” he said.

This was the Wildcats second tournament win of the early season after going 5-0 in a tournament at Sipsey Valley, which makes their overall tournament record 8-0 on the year.

The team has been receiving several votes to jump into the rankings, but have failed to do so thus far. With games coming up this week against Calera, Sylacauga and Indian Springs they will have a chance to make a statement as one of the best teams in Class 5A and avenge their early season loss to Calera, as well as get a big area win over Sylacauga.

“They’re pretty focused right now, but they need to do a better job of focusing on each individual point so they don’t get themselves in a hole,” Creekmore said. “We have to start going for every point and get ourselves a lead to work with.”