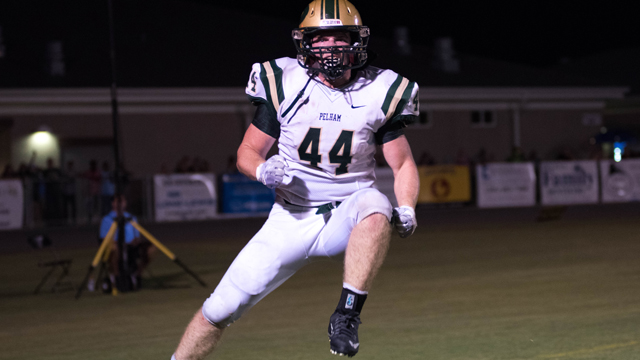 Jon Drake and the Pelham Panthers broke through on Sept. 9 with a huge win over Helena. Can the Panthers’ build on that with a win over Chelsea this week? (Reporter Photo / Keith McCoy)

Okay. Okay. Tough week last week from a prediction standpoint, no way around. We knew there were going to be some tight ones last week, and with four games decided by a touchdown or less, that went about as planned, we just happen to call every one of those wrong and then some. However, it is in the face of adversity when much can be determined about someone’s character, and with that in mind let’s jump back up on that prediction horse and get ready for Week 5. Let’s hit it.

The Jags were given a rude wake up call on Friday night. The Hoover defense kept Spain Park in check all night and the Bucs scored 26 points on offense, which was the most given up by the Spain Park defense sine Sept. 18 of last year. In an attempt to rebound this week, Spain Park will host Mountain Brook, both of which are 1-1 in region play. Mountain Brook, as we’ve stated before, is not to be trifled with and will give the Jaguars all they can handle this week. However, back at home with the prospect of a bye week looming closely in the future, the Jags bounce back from a disappointing showing at the Met and stay towards the top of the Region 3 heap. Spain Park 24 – Mountain Brook 17.

This could be the game of the week. Oak Mountain is coming off a statement, 34-7 win over Vestavia Hills in a game the Eagles dominated in just about every way possible. Thompson on the other hand dropped from the ranks of the unbeaten last week after losing to Mountain Brook 20-17. Now, with both the Eagles and the Warriors at 1-1 in region play, a win is critical for both to remain on the right side of the region standings. While Oak Mountain sophomore quarterback Jackson Kimbrell played exceptionally well last week in place of the injured Wyatt Legas, and senior running back Daniel Salchert is doing anything and everything he can to keep this Eagle team afloat, this Thompson defensive unit is unlike anything the Eagles have seen to this point. On the backs of Austin Davis, Nick Mobley and Ar’Shon Willis, this Thompson team will get a win at home. Thompson 21 – Oak Mountain 10.

Helena, fresh off a hard-to-swallow loss at the hands of rival Pelham, is still 1-1 in region play and the sky is not falling just yet. Although the loss to Pelham is a tough one for Husky fans, this team shouldn’t be counted out of playoff contention, but with Opelika, Benjamin Russell, Chelsea and Wetumpka all still looming on the region schedule, the Huskies are in mildly hot water. This week however, as Helena welcomes in a Homewood team that is not as talented as past Patriot teams have been, Helena is just worrying about getting back to .500 on the year. Unfortunately, when it rains it pours in Helena, and the Huskies will drop to 1-3 this week. Homewood 24 – Helena 21.

Pelham and Chelsea are coming into this game in the same spot, although it doesn’t feel like it. Chelsea got off to a hot 3-0 start, as the Hornets have been prone to do in recent years, while Pelham once again stumbled out of the gate and promptly fell to 0-3. Week 4 changed things, however, as the Panthers got what was a potentially season-saving win over cross-town rival Helena while Chelsea fell to Benjamin Russell in a game the Hornets had chances to win. Now however, all of that is in the past as both the Panthers and the Hornets come into this game at 1-1 in region play, and a win will keep the winner in the drivers’ seat for a playoff spot. While Pelham, this Chelsea offense will be too much for the Panthers to handle. Chelsea gets the win here. Chelsea 35 – Pelham 21.

Shelby County lost a game last week they simply shouldn’t have lost to Moody. Now, in the wake of that loss and a 1-1 record in 5A Region 5, the Wildcats will host a Wenonah team looking for blood. The Dragons are good, and gave up a 14-0 lead last week to Briarwood en route to a 15-14 loss, and will likely come out of the gate swinging this week to avoid another such let down. Both teams are coming off games they probably should have won, and both are looking to redeem those losses with a win this week. Unfortunately for Shelby County, it won’t be the home team that comes out on top this week as Jadarius Wedwine and the Dragons get the win. Wenonah 28 – Shelby County 24.

Congrats are in order for this Briarwood bunch, who came back from a late 14-0 deficit to beat a feisty Wenonah team 15-14. That’s the kind of gritty, gut-check win that serves teams well in late October and into November, and is a good sign of things to come for this Lions team. Now Briarwood will host the only other undefeated team in 5A Region 5 play, the Fairfield Tigers, for the top overall slot in the region through the first half of the year. We see no reason why Briarwood shouldn’t handle their business at home this week. While Briarwood still isn’t going to put up points in bunches, this Lion team might have just found their swagger, and as a result might just be ready to surprise some folks. Briarwood 21 – Fairfield 10.

This is potentially the biggest game of the regular season for Calera. The Eagles, 4-0 for the first time since they finished the regular season at 9-1 in 2013, are hosting region rival Demopolis this Friday. Calera has played Demopolis each of the past two years, and has lost to the Tigers both times by an average of 17 points. This season however is going to be different. We said before the year started that Calera was going to win three games all season, and the Eagles have already outstripped that number in just four games. Now, until they give us a reason not to, we’re all in on this Calera team. Calera 42 – Demopolis 33.

For the second week in a row Montevallo is suiting up against a team that has yet to win a game this year, and should take care of business against the winless Patriots this week. Although, Midfield’s three losses so far have come against Wenonah, Oakman and Gordo, which gives the Pats one of the toughest opening three-game starts around. The Bulldogs will roll this week most likely and move to 4-0 before Brandon Wilcox’s bunch gets into the meat of its schedule. Montevallo’s schedule is extremely back loaded this year, with games against formidable region opponents Greene County, Oakman and Gordo all looming in successive weeks from Sept. 30 – Oct. 14. That is when we will really get an idea of where this Bulldog team falls in the spectrum of 3A teams. Until then, however, the Bulldogs will stay perfect. Montevallo 35 – Midfield 20.

Vincent is coming off a brutal back-to-back stretch that saw the Yellow Jackets host the fifth and fourth-ranked teams in 2A in LaFayette and Lanett. Both of those teams have serious talent on their rosters and could be playing deep into November, and Vincent simply isn’t on a level to compete with those kinds of teams yet. However, now the Yellow Jackets are moving into a more palatable portion of their schedule and should look to compete in some games moving forward. However, while Vincent will be competitive in some games moving forward, that likely won’t happen this week, as the Yellow Jackets travel to take on a Fayetteville team competing for a playoff berth. Fayetteville 42 – Vincent 20.