Spirit Night is back at Chelsea Park Elementary 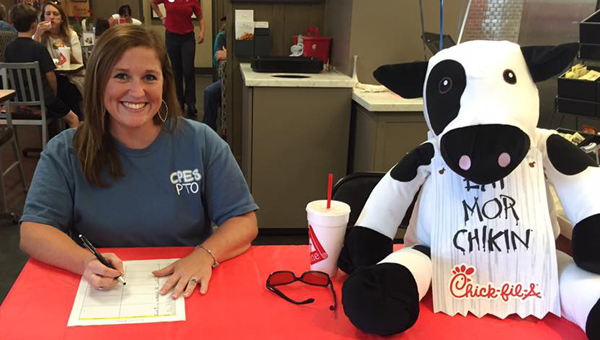 The Chelsea Park Elementary PTO is hosting its first Spirit Night of the 2016-2017 school year at the Greystone Chick-fil-A. The event is raising money for an outdoor classroom to be added at CPES. (Contributed)

CHELSEA – Chelsea Park Elementary PTO started up the first of its second annual spirit nights on Monday, Sept. 12 and will conclude Tuesday, Sept. 13 at the Greystone Chick-fil-A at the intersection of Alabama 119 and U.S. 280.

Chelsea Park PTO started hosting spirit nights last year and they are excited to see how the fundraiser grows in year two.

“We implemented spirit night last year because we saw other schools and sporting teams around the area hosting similar events that were successful so we decided to give it a try as well,” said Chelsea Park PTO President Lisa George.

During last year’s spirit nights, George said they were able to raise money for new Chromebooks and also replaced mulch on all of the playgrounds.

This year she said they have slightly bigger goals set.

“The money we raise during this first spirit night will go toward building an outdoor classroom,” George said.

She said the reasoning behind this was because the school had grown so much that gifted classes have had to be moved to trailers, which has separated them from each other causing students to lose the opportunity to work together like they have in previous years.

“The goal of the outdoor classroom is to be able to bring the gifted classes together to work with one another like they need to be able to do,” George said.

Chick-fil-A is helping by giving 15 percent of all dine-in proceeds to CPES and if you decide to go the drive-thru route, just simply say you are there from CPES and 15 percent of those proceeds will go to the school as well.

“We did a spirit night with them (Chick-fil-A ) last year and it couldn’t have gone better,” George said. “They are just really helpful and care about the local community and schools.”

If you would like to be a part of the first spirit night of the year you can stop by Chick-fil-A Sept. 13, from 5-7 p.m.

“We are very fortunate because we always have great participation from our students and family,” George said. “There’s just a great sense of community and the kids love it.”

The Chick-fil-A cow will also be in attendance for all kids to take pictures with and meet.

This is the first of four spirit nights the PTO will hold, and George said the hope is future fundraisers will go toward helping out with a new track at the school by adding landscaping and benches.

The class who has the most participation of this two-night event will win a party that will give them the choice of ice cream or a nugget or cookie tray.

Shelby Humane Society has partnered with Alabama Spay/Neuter to offer a special promotion for spaying and neutering pets. After receiving... read more