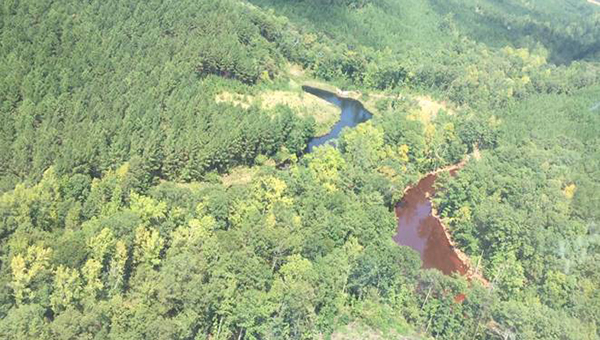 Pictured is an aerial photo of two of the three mine water retention ponds at the incident site in unincorporated Shelby County. The retention pond on the right is where the gasoline has been contained. (Contributed)

In response to a gas leak that occurred on Sept. 9, that has released an estimated 6,000 barrels of gasoline into an unincorporated portion of Shelby County, Alabama Gov. Robert Bentley declared a state of emergency on Thursday, Sept. 15, as the shutdown of the pipeline has caused a disruption of gasoline distribution for the use of citizens throughout the state.

Colonial Pipeline has more than 500 employees on site that have been working with local, state and federal officials around-the-clock to try and resolve the issue.

The repair of the leak is still incomplete, and the timeframe for completion is still unknown. The gasoline shortage could impact the safety of the residents in Alabama, according to Bentley.

Colonial Pipeline said work activity was intermittent the night of Sept. 14 and Sept. 15 due to unfavorable weather conditions that caused gasoline vapors to settle over the site. Operations will resume as officials deem conditions safe, and Colonial Pipeline said the top priority of the response effort remains the safety and protection of the public, responders and the environment.

The pipeline is normally a 1.3 million-barrel-a-day operation, and its shutdown has elicited a response from the Environmental Protection Agency and has disrupted travel plans for a gasoline delivery to New York.

Colonial Pipeline delivers more than 100 million gallons of refined products each day to markets between Houston and New York City, serving more than 50 million people each day. The company is based in Alpharetta, Ga.

To receive updates on the continued cleanup efforts, visit Helena.colonialresponse.com.

Stuff the Bus Diaper Drive to help those in need

A decorated school bus is set up near Target off U.S. 280 as part of a diaper drive that lasts... read more