Stuff the Bus Diaper Drive to help those in need 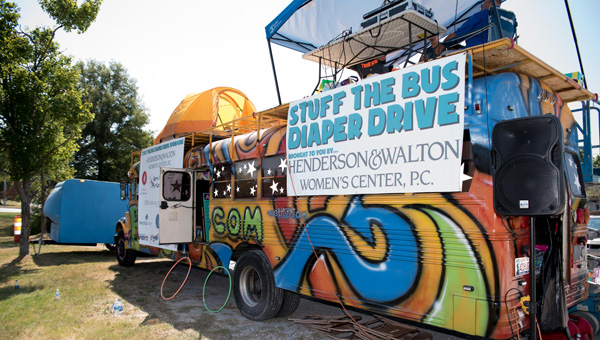 A decorated school bus is set up near Target off U.S. 280 as part of a diaper drive that lasts through Sept. 18. (Photo by Keith McCoy)

NORTH SHELBY – Concerned residents have until 2 p.m. on Sept. 18 to help “Stuff the Bus” as part of a diaper drive for those in need.

Bundles of Hope Diaper Bank is holding the Stuff the Bus Diaper Drive for the second year. A decorated yellow school bus is parked in the gravel lot just off U.S. 280 near Target, located at 4616 U.S. 280.

Nacy Owen, executive director of Bundles of Hope, said the goal for the drive is 125,000 diapers. As of the afternoon of Sept. 15, the drive was less than halfway to the goal, though a competition pitting Alabama fans against Auburn fans was sure to help narrow the gap.

“We’re a non-profit, so we rely on donations of diapers and monetary donations where we can go purchase the diapers ourselves at about half the retail price,” Owen said.

The bus belongs to Skip and Lesley Bondur and is used for various similar efforts.

“He climbs up on the bus at the beginning of a drive, and he does not come down off the bus at all until the drive is over,” Owen said of Skip Bondur. “It draws attention to what we’re trying to do. He loves what he does, but it’s a sacrifice. He’s away from his family and his children. If he can make that kind of sacrifice, surely we can give a little bit back in the way of some diapers.”

One in three families locally experience diaper need, Owen said, where they can not provide an adequate number of diapers for children, who usually need about 50 diapers per week.

“There’s the guilt and shame felt by parents because they can’t supply enough diapers so children are kept in dirty diapers, which can cause all sorts of problems,” Owen said and added that there is no government assistance with diapers. “We take the diapers people donate, put them in new packaging in packs of 25 and give people 50 at a time. Most families say that if they could just get a week’s worth, they could get ahead.”

The diapers are distributed by food pantries, including First Baptist Church of Alabaster and three others in Jefferson County.

Bundles of Hope, which serves about 400 children each month, is based at Christian Service Mission in Birmingham. Donations are accepted at that location year-round.

Owen said monetary donations are also accepted, and $10 can sponsor one child for a month.

In addition to the Alabama-Auburn contest, other attractions held as part of Stuff the Bus included daily raffles, a bounce house and exotic animals from 6th Day Creation.

For information about Bundles of Hope, visit BundlesDiaperBank.org. Follow them on social media for updates about Stuff the Bus.

Woman shares story of redemption at 10th Harvest of…