Record breakdown: What are the chances your team makes the playoffs? 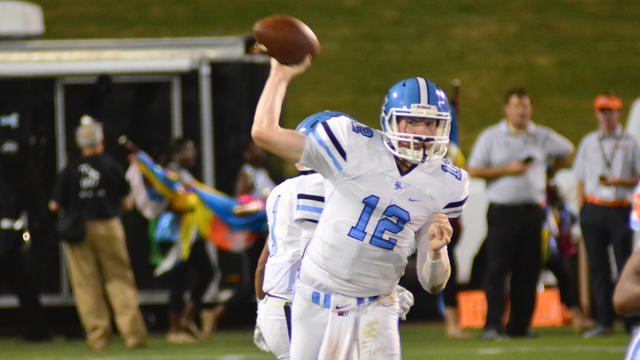 Spain Park, one of the seven county teams sitting at 1-1 in region play entering tonight’s game, has a big game ahead tonight. (File)

Through four weeks of the 2016 football season, almost every county team is either outperforming their 2015 pace or matching it. There are only a pair of teams, Helena and Chelsea, that have failed to at least match their record from last year through Week 4. While that is exciting and opens up a number of early playoff discussions for teams around the county, how likely is it, exactly, that one team will make the playoffs over another?

We went back and looked at the records for each AHSAA team in the county from the past 15 years (2000-15) and looked specifically at how each team performed in its first three region games to see if any interesting patterns emerged for how those teams played throughout the rest of the year. This is a fun thing and also an unnecessary thing to do, but it does provide a reference point and can tell us what to expect in the back half of the season.

As expected, teams that start out 3-0 in region play don’t see their season end after just 10 games. In the last 15 years, a county team has started 3-0 in region play 33 times, and those teams have made the playoffs 33 times. Of those 33 teams, only eight lost in the first round of the playoffs as well, meaning that 76 percent of the teams that have started out with a 3-0 region record since 2000 have advanced to at least the second round of the playoffs.

Teams that have started off at 2-1 in region play have had overall records varying anywhere from 5-1 to 2-3 at the time of their third region outcome, and those teams have made the playoffs 38 out of 50 times, marking a playoff percentage of 76 percent. While the majority of teams that have started out 2-1 in region play have seen the postseason, enough of those teams have also missed a playoff berth for that outcome not to be viewed as an anomaly. If four or more teams in the county are 2-1 in region play after tonight, odds are at least one is still going to miss the playoffs.

When we get down below a 2-1 start in region play, the results for the end of the season obviously get a little bleaker. In the last 15 years, county teams have started off 1-2 in region play 49 times, and only 13 of those 49 teams eventually made the playoffs, working out to a percentage of 27 percent. For all the teams sitting at the 1-1 mark in region play heading into tonight’s games, namely Oak Mountain, Spain Park, Thompson, Helena, Pelham, Chelsea and Shelby County, history says this is a crucial game to win.

Teams that have started out 0-3 in region play, with overall records varying from 4-3 to 0-6 at the time, have made the playoffs just once in 28 tries in the last 15 years. For those keeping track at home, that’s a very poor percentage (roughly a four percent success rate). The one team to pull it off, surprisingly enough, actually limped out of the gate to an 0-4 start in region play before making the playoffs. This happened in 2005, when Shelby County started off 1-4 (0-4) before finishing the regular season 6-4 (3-4), which put the Wildcats in the 5A playoffs thanks to a number of tiebreakers.

Also of note, only three times in the past 15 years has a team started off 0-3 overall and made the playoffs. Briarwood has done it twice, once in 2012 and once last year in 2015, and the Lions have advanced past the first round of the playoffs in each of those two seasons as well, making them a significant outlier.

As with any historical statistic you see, we haven’t learned anything that you didn’t already latently know. Teams that start out 3-0 in region play have a better shot at making the playoffs than a team that starts out 1-2 in the region. That’s math. But now at least we know that this third region game is a big one for all those .500 teams trying to stay at the top half of region play.