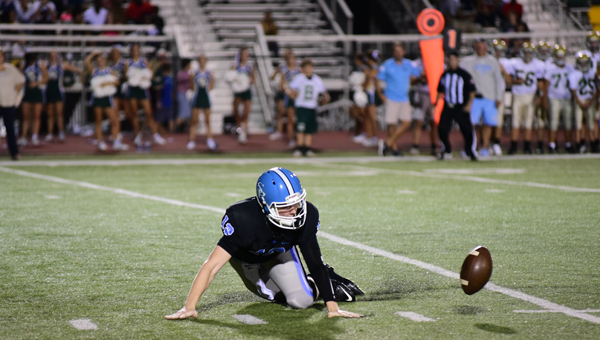 Spain Park quarterback Hunter Howell could not recover a fumbled snap in late in the second quarter of a loss to Mountain Brook. (Photos by Stephen Dawkins)

HOOVER – A season that started with high expectations is full of questions after Spain Park’s football team dropped its second consecutive game, 23-21 to Mountain Brook on Sept. 16.

The Jaguars (3-2 overall, 1-2 region) entered last week’s game against Hoover unbeaten, ranked No. 2 in Class 7A and coming off a season in which they played in the state championship game.

But losses to the rival Buccaneers and then to the visiting Spartans (4-1, 2-1) on homecoming has Spain Park needing to right the ship in order to ensure a playoff berth.

Fortunately, the players and coaches have two weeks to find answers before they play another game, as the team has an off week on Sept. 23.

“We’ve got to figure out what’s going on and get it fixed,” SPHS coach Shawn Raney said. “We still have a lot left to play for.”

The hosts fought back from a 20-7 third-quarter deficit to take a short-lived lead in the fourth quarter.

Howell completed 10 passes in 16 attempts for 80 yards, one touchdown and two interceptions. His favorite targets were Jordan (four catches for 38 yards) and Larry Wooden (five catches for 29 yards).

Dillard was good on a couple of field goals in the first half, but the Jaguars took a 7-6 lead into halftime. 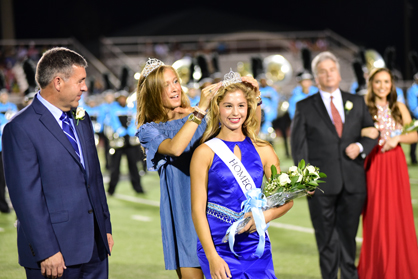 Mountain Brook took the first possession of the second half and scored on a one-yard run by quarterback Hamp Sisson to take its first lead of the game, 13-6 after the extra point.

The Spartans’ Bradford Turner then recovered an onside kick, and Sisson turned the break into points when he rolled left, stopped and scrambled back to the right then passed to a wide open Sims Herron in the back of the end zone from 24 yards out.

Spain Park responded by 75 yards in 11 plays—all rushes—and scoring on a two-yard run by D’arie Johnson with 2:42 remaining in the third quarter.

Another long SPHS drive—this one 80 yards—midway through the fourth quarter gave the Jaguars the lead, 21-20, when Johnson plunged into the end zone from one yard out on a fourth down play.

Mountain Brook took possession with 3:32 left in the game. A pass from Sisson to Wilson Higgins and then a 26-yard run by the quarterback advanced the Spartans into field goal range.

Spain Park got the ball back with only seconds remaining but threw an interception on the last play of the game.

Record breakdown: What are the chances your team makes…