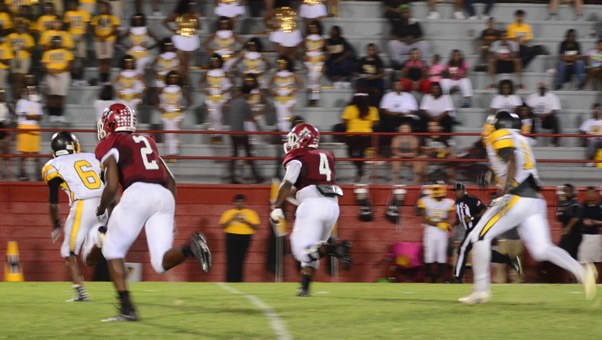 Aremee Calloway broke loose for a 29-yard run, which would end up being the longest Shelby County play of the night. (Reporter photo/Alec Etheredge)

COLUMBIANA – The Shelby County Wildcats hosted the Wenonah Dragons in a Class 5A Region 5 matchup on Friday, Sept. 16. Whichever team won this game would move to 2-1 in the area and vice versa the team that lost would move to 1-2.

The Wildcats dug themselves into an early hole for the second consecutive week that they wouldn’t be able to overcome as the Dragons would go on to win this one by a final score of 46-14.

Shelby County started the game out with three straight three and outs on their first three drives to find themselves facing a first quarter 20-0 deficit.

“The first three drives we were in a new offensive set and for whatever reason we didn’t get it coached well enough and it didn’t work,” said Wildcats head coach Heath Childers.

Wenonah took the opening drive down the field in 2:30 seconds to go up 6-0 and would score on two of Shelby County’s three, three and outs with a punt return for a touchdown and a 58-yard touchdown drive in that order.

The Shelby County offense finally woke up on their fourth drive of the game as they went on a 3:29 eight-play drive thanks to a 29-yard run by Aremee Calloway and an eight yard touchdown run by Jeremiah Crenshaw, which trimmed the Dragons lead to 20-7.

That excitement didn’t last long as the Dragons answered with a quick touchdown drive of 2:32 to put them up 26-7 with 6:42 until halftime.

Shelby County finally had some momentum on offense however and would answer right back with another touchdown after Crenshaw and Calloway combined for 35 yards of rushing to set up a first and goal for the Wildcats from the five yard line.

Calloway would eventually punch the ball across the goal line to cut the Wenonah lead to 26-14 with 2:31 left in the second quarter.

“After those first three drives we went back to our regular offense and had two really good drives to get things going, but by that time the defense had gotten to the point where they couldn’t stop anybody or anything,” Childers said.

It looked like that was going to be the halftime score, especially after the Dragons had four consecutive pre-snap penalties.

However after those four consecutive penalties, on the fifth play Wenonah quarterback Carlos Rogers through a rocket pass that ended up leading to a 70-yard gain and the Dragons would score three plays later to go up 32-14 as they headed into the locker room.

The Wildcats got the ball back to start the second half with a huge opportunity to make it a game again. They went on a nine-play drive that featured a 13-yard run by Crenshaw and a 14-yard catch by Lamont Bush to get to the Wenonah 35-yard line.

After a couple of runs were stuffed, there was a fumbled snap by quarterback Chadwyn Russ on third and 11, which completely stalled the drive and led to a turnover on downs.

“If we get a score there we are right back in the game and when we didn’t it just really unraveled for us,” Childers said.

Wenonah would score on a 59-yard touchdown run on the ensuing drive to go up 40-14. Shelby County wouldn’t have another successful drive the rest of the night, eventually leading to the 46-14 loss and 1-2 record in area play.

The Wildcats still have plenty of opportunity ahead of them and by no means does this mean their season is done, but it’s more of an uphill battle than they wanted.

“It’s a long season and we always start over on Sunday,” Childers said. “If you look up at the clock right now its on triple zero’s so there’s nothing we can do to change this outcome. We have to go back to work and have a good week of practice.”

Calloway led the ground attack with four carries for 78 yards and a touchdown, while Crenshaw added 37 yards and one touchdown on eight carries, but the Wildcats were ultimately held to a season low 151 rushing yards and 15 passing yards.

Next week on Friday, Sept. 23, the 2-2 Wildcats host a 1-3 Springville team that is an extremely winnable game and should give them some confidence before traveling to Fairfield on Sept. 30. 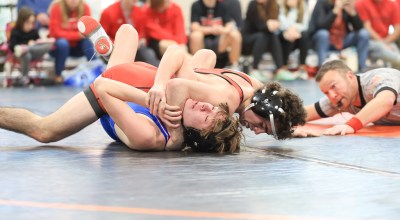 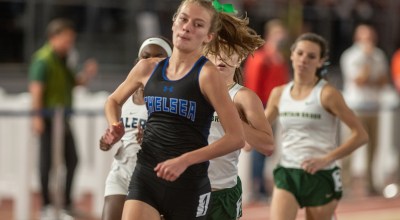 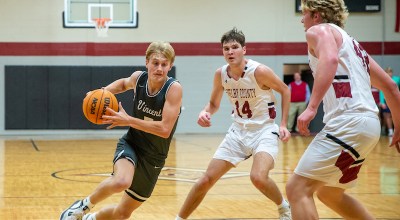