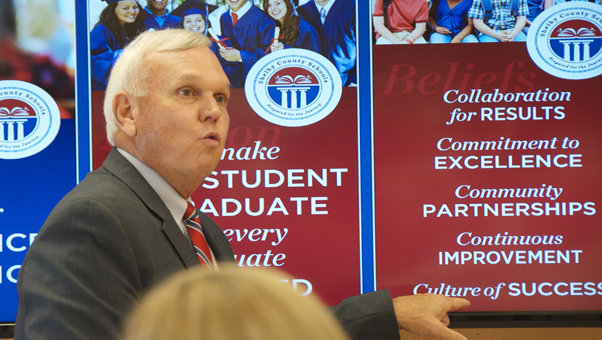 Shelby County Superintendent Randy Fuller addressed the CBA at a luncheon on Wednesday, Sept. 14, to give an update on Shelby County Schools. (Reporter photo/Alec Etheredge)

Fuller gave a presentation that went over the future growth of cities and how to keep Shelby County Schools as one of the best county school systems in Alabama.

One of the first slides Fuller went over during his presentation was a list of the top 10 cities in Birmingham primed for growth. On the list were seven cities from Shelby County: Calera, Chelsea, Pelham, Helena, Montevallo, Hoover and Alabaster all made the cut with Calera and Chelsea being one and two overall.

“Chelsea is primed for it and I can tell you that for a fact because we see the growth happening,” Fuller said. “Chelsea, Helena and Calera are fast growth areas in our school system that we are paying close attention to.”

He also said last year 20,039 students were enrolled in Shelby County Schools and this year that total is up to 20,314 students.

Fuller credited the success of Shelby County Schools to a diagram they follow that he referred to as “Engines that drive the system.” Those four engines include continuous school improvement (CSI), strategic planning, leadership development and curriculum, instruction and assessment.

“This is what makes Shelby County a leader in Alabama education,” he said.

He also said getting rid of common core like “newspapers” say to do is “bogus.”

Speaking of the future, Fuller mentioned the county’s plans to handle the population growth that Chelsea is experiencing. He shut down the idea of building a new high school or middle school.

“Chelsea Middle School is probably one of the best middle school facilities around after some of the renovations that we’ve done,” he said. “It’s a little older, but it has all of the ingredients to be successful. A lot of middle schools throughout our school system would love to have a facility like this.”

Fuller said while they were doing those renovations to the middle school several parents asked why a new middle school couldn’t be built.

“You’ve got great facilities already,” was his response to that. “We will continue to make them improved and as great as we can.”

As far as Chelsea High School goes, Fuller said they have a plan in place to add an additional 20 classrooms, which would help improve overcrowding the school faces.

“This just shows that we are getting out and working with our kids, counselors and principals to help make our school system as good as it possibly can be,” Fuller said. “We look to continue to make those numbers grow and improve.”