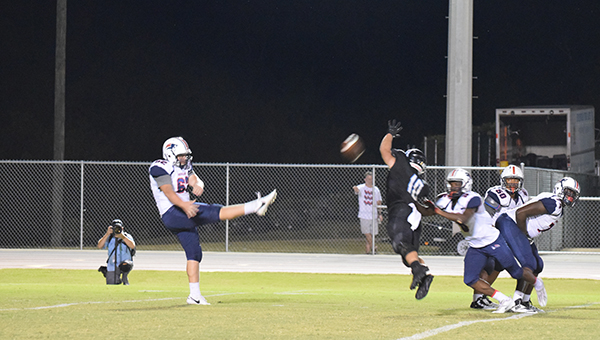 Helena’s Nash Adams (10) blocks a Homewood punt in the third quarter to help spark a win for Helena on Friday, Sept. 16. (For the Reporter/Brian Vansant)

HELENA–Helena scored on their first offensive possession and used a third quarter blocked punt to help propel them to a 25-7 win against the Homewood Patriots on Friday, Sept. 16.

Helena opened the game with an 11-play 84-yard drive. They capped off the drive with a 6-yard touchdown run by Devan Walker and Helena led 6-0 after the first quarter.

The Helena defense dominated all night long holding the patriots offense to 170 total yards and did not allow a third down conversion.

“We were really excited about our defensive play this week and we just had a great week of preparation,” said Helena head coach Watt Parker after the game. “After a heartbreaker last week, I thought our guys responded really, really well. I’m proud of their effort all the way around.”

In the second quarter, the Helena offense had another long drive that consisted of nine plays 86 yards with Nash Adams plunging in for an 8-yard touchdown run to put the Huskies up 12-0 at halftime.

With Helena leading 12-0 in the third quarter, they got a spark from special teams as Adams blocked a Patriots punt and the Huskies took over on Homewood’s 31-yard line.

Helena capitalized on the good field position and scored a few plays later on a 7-yard run by Walker, his second rushing touchdown of the night to put Helena up 19-0 going into the fourth quarter. Walker would finish the game with 117 rushing yards and three touchdowns.

The Homewood offense was shaky all night as the Patriots missed two field goals and had one lone touchdown on the night that came late in the fourth quarter on a 65-yard touchdown reception by Ryan Williams.

Helena got a bounce back victory after losing a heart breaker to Pelham 27-23 a week prior.

With the win over Homewood, Helena improved their record to 2-2 on the season (1-1 in region play).

Helena’s next game will be Friday, Sept. 23 against Vestavia.