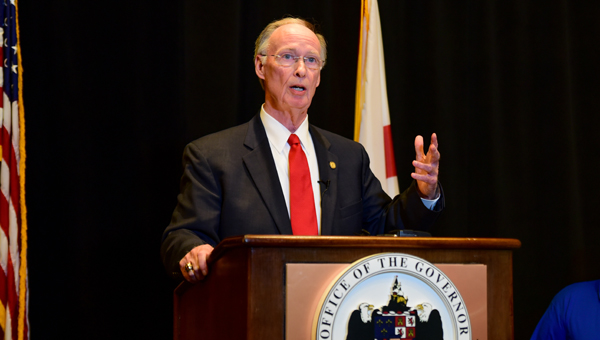 Alabama Gov. Robert Bentley toured a command center that has been set up at Ross Bridge in Hoover in response to a gasoline leak in Shelby County, and held a press conference after a briefing with officials. (Photo by Keith McCoy)

A leak in one of Colonial Pipeline’s two main pipelines was discovered Sept. 9 in an unincorporated area of Shelby County near the intersection of Shelby County 270 and Coalmont Road near Helena.

A command center has been set up at Renaissance Ross Bridge in Hoover, where Bentley received briefings from officials with Colonial Pipeline, U.S. Environmental Protection Agency, Alabama Department of Environmental Management and Alabama Emergency Management Agency.

After the briefing, Bentley held a press conference to talk about the spill, which potentially could affect not only Shelby County residents but residents across the Southeast and beyond.

An estimated 6,000 to 8,000 barrels of refined gasoline spilled, which could impact supplies all along the route of the pipeline running from Houston, Texas along the Eastern seaboard and ending in Linden, New Jersey.

Bentley said he has been “impressed” with Colonial’s response, which most recently includes the construction of a temporary section of pipeline to bypass the leak site that could be completed as soon as this week.

“They have done a very good job of reacting to this particular incident that has happened in Shelby County,” said Bentley, who later in the press conference confirmed that he is satisfied with the response, which includes about 700 workers.

The governor said he had observed the area of the spill through drone video footage and described the area as “somewhat rural and rugged.”

Bentley compared the response and command center to that employed by state agencies in the event of a natural disaster, and said Colonial held a “mock disaster” in August 2015.

Angie Kolar with Colonial also answered questions from media members. She said that though the leaky pipe was more than 50 years old, age should not have been a factor because of a “robust” system in place to manage the integrity of the pipelines.

Bentley said three areas of focus should be the safety of residents in the area and workers at the site, mitigating damage to the environment, and ensuring an adequate supply of gasoline continues and that no price gouging occurs.

“There is a lot of monitoring that is going on at this time of not only air quality but also water quality,” he said.

When asked about the potential for long-term adverse effects on the environment, Bentley said that much of the leaked gasoline has already been removed and that testing will continue.

The governor said gasoline prices will be higher in the coming days and possibly weeks, but somewhat higher prices does not necessarily constitute price gouging.

He encouraged consumers who think they have been subjected to price gouging should call a hotline at 800-392-5658.

Under normal circumstances, the Colonial Pipeline system transports approximately 2.6 million barrels of refined products each day, with Line 1, which leaked, accounting for half of this volume.

Colonial is currently shipping significant volumes of gasoline on Line 2 to help offset the impact of the service interruption to Line 1.

Bentley declared a state of emergency on Sept. 15 as the shutdown of the pipeline has caused a disruption of gasoline distribution for the use of citizens throughout the state. Bentley said the gasoline shortage could impact the safety of the residents in Alabama.