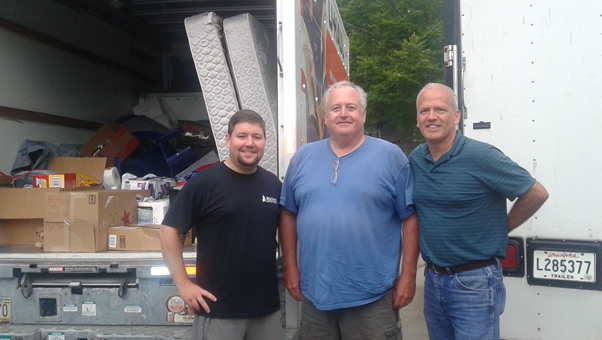 Steven Lanclos, left, drove a truck full of donations from St. John’s Anglican Church in Chelsea down to Baton Rouge, La. to help flood victims. Lanclos is the Deacon at the Chelsea church and decided to raise items to donate to St. Paul’s Reformed Episcopal Church in Baton Rouge. (Contributed)

CHELSEA – St. John’s Anglican Church in Chelsea has taken steps to help out flood victims in Louisiana by donating supplies to Baton Rouge and Lafayette.

Steven Lanclos, a Deacon at the Chelsea church, is from the Lafayette area and knows several people at St. Paul’s Reformed Episcopal Church in Baton Rouge.

“I know their pastor pretty well and through Facebook I saw that a friend of mine at their church was affected by the flooding and was asking for supplies,” Lanclos said. “That’s when we decided to start collecting items and money to take down.”

Lanclos has been at St. Johns for three years and just became the Deacon of the church a little less than a year ago.

Once he knew he could help, he didn’t hesitate to propose the idea of his church gathering supplies and donating them.

The majority of the donations came from people throughout St. John’s Church, and over the weekend of Sept. 17, he and a few others loaded up a 15-foot U-Haul truck, drove it down to the Louisiana church and unloaded 80 percent of the items before continuing on to Lafayette to unload the rest.

“I’m from Lafayette and several of my family members and friends lost a lot during the flooding,” Lanclos said.

Those family members included both his parents and brother.

In his childhood home his parents had to gut the walls of their house up to four feet high, which meant replacing insulation, floors and siding, as well as any other furniture or goods they had near the lower half of their house.

“They aren’t living in the house right now and probably won’t be until at least December,” Lanclos said. “The last couple of weeks has consisted of them going over to their house to work on it with friends and members from their church.” 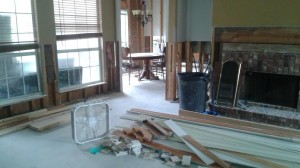 The Lanclos family home is undergoing a lot of rebuilding due to flooding that ruined the floors and walls. All walls had to be replaced at least four feet off the ground. (Contributed)

He also said they were having to wait for contractors to help finish up the walls, but they are all booked and have waiting lists because of the amount of people needing help.

His brother was renting a house in the area and it most likely won’t be worth moving back into, so he and his family have to consider the option of finding a new house.

“I didn’t even realize how bad it was until I got down there and walked into the house I grew up in and saw the entire thing gutted on the inside, my first reaction was, ‘Whoa, I can’t believe this,’” Lanclos said.

Lanclos said his church was able to donate items such as furniture, clothes, construction items and even money to help those in need.

“We did what we could as far as collecting supplies and funds,” he said. “The reason we did this was because people needed our help. This is what we are supposed to do and what God calls on us to do. We are supposed to help those in need and that is exactly what we are doing.”