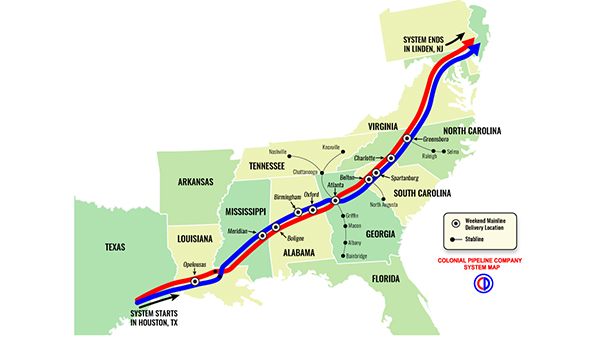 Pictured is a map showing where Colonial Pipeline delivered gasoline to mainline terminals, which will then be sent to several local terminals in affected areas. (Contributed)

Colonial Pipeline is currently in the process of delivering gasoline to distribution terminals throughout much of the Southeast to help minimize supply disruptions, according to the latest update from Colonial Pipeline on Sept. 19.

Repair work continues on one of the two mainlines which transports gasoline from refiners on the Gulf Coast to delivery locations along the Eastern seaboard.

Gasoline shipments are either en route or have already been delivered to mainline terminals in several markets, including Boligee, Oxford and Birmingham, Opelousas, La., Atlanta, Meridian, Miss., Belton and Spartanburg, S.C., and Greensboro and Charlotte, N.C.

Once the delivery has been made to mainline terminals, Colonial will deliver fuel directly to local terminal customers or re-originate the fuel down lateral or stublines to additional terminals in several other markets, including Griffin, Macon, Albany and Bainbridge, Ga., Raleigh and Selma, N.C., Nashville, Knoxville and Chattanooga, Tenn., and North Augusta, S.C.

Under normal circumstances, the Colonial Pipeline system transports approximately 2.6 million barrels of refined products each day, with Line 1 accounting for half of this volume. Colonial is currently shipping significant volumes of gasoline on Line 2, the distillate mainline, to help mitigate the impact of the service interruption to Line 1.