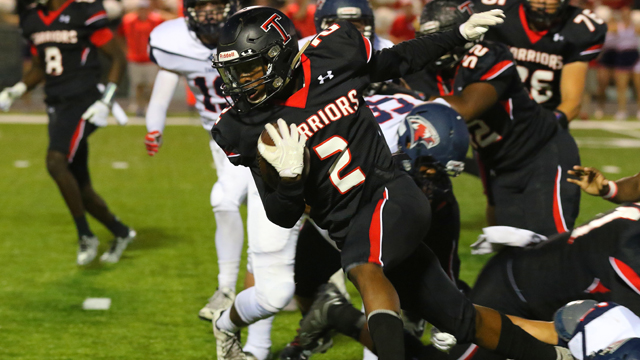 Thompson came out on the wrong side of a thriller against Oak Mountain last week. Can the Warriors bounce back? (File)

That was quite the week. With two games decided on the last play of the game and a number of tight finishes all around the county, last week’s prediction record wasn’t great, but it was a decent bounce back from the abysmal performance the week before. With a few teams on bye this week, we have a smattering of eight AHSAA games to take a look at this week, so let’s get to it.

For the second year in a row, the Warriors came out on the wrong side of a barnburner against Oak Mountain. The Warriors held a 28-24 lead over the Eagles as time wound down, but Oak Mountain’s backup sophomore quarterback Jackson Kimbrell put himself on the map, heaving a Hail Mary toss that fell into the hands of Ethan Duncan, which gave Oak Mountain the win. Now, reeling at 1-2 in region play, the Warriors are in danger of falling out of the playoff race in 7A Region 3. Thompson should come out ready to let loose a ton of frustration this week from the heartbreaking loss, which makes the timing of this matchup unfortunate for rival Pelham, and the Warriors will roll. Thompson 42 – Pelham 21.

Here are two teams that no one is quite sure what to make of yet. On the one hand there’s a Vestavia team that got shelled by Oak Mountain 34-7, which at the time knocked them to 0-2 in region play, a week before beating Huffman, a team that was 2-0 in region play, 35-21. Helena has been equally as vexing, losing to Pelham but beating a Homewood team that beat the Panthers in the first game of the year. Helena is a good team with solid athletes, and if the Huskies won this game, it wouldn’t be a shock. But it seems as if Vestavia’s outlying loss to Oak Mountain was more anomaly than norm, and Helena will fall to 2-3 this week. Vestavia 28 – Helena 24.

Offense offense offense. That’s what you can expect in this one. Chelsea is averaging 42.3 points per game this season and is giving up an average of 30.2, meaning most every game the Hornets have played so far has been a shootout. Gardendale, averaging 32 points per game, is no offensive slouch either, and there’s no reason to suspect this won’t be another high scoring affair. Matt Marquet and Zalon Reynolds are the dual motors that make this Chelsea team run, and that’s not a secret. What has yet to be discovered is how to effectively shut them down. Chelsea wins this week in the out-of-region contest. Chelsea 45 – Gardendale 35.

After such a hot 2-0 start, Shelby County now finds itself sitting at .500 on the season and 1-2 in region play. The Wildcats are coming off a tough, 46-14 loss to Wenonah in a game they were never truly in, and now must rebound to avoid falling into the same situation this team was in a season ago. This week, against a Springville team that has only scored 21 points once this season, Shelby County should get back on track. Shelby County 35 – Springville 21.

Both Briarwood and Mortimer Jordan started out 0-1 this year and have not lost since. The Blue Devils, led by athletic freak Spencer Brown, are the No. 4 ranked team in the 5A class and, since losing to Cordova by a touchdown in the first game of the year, have won their last four games by an average score of 42-16. Briarwood is a playoff team this year in 5A, make no mistake. This team has senior leadership at the quarterback position in Will Gray and young talent in the likes of JR Tran-Reno and Carson Eddy, but the Lions won’t be able to trade blows for four quarters against an offense like Mortimer Jordan’s. Mortimer Jordan 45 – Briarwood 28.

That did not go according to plan for the Eagles. Calera was sporting a pretty 4-0 record last week and had just been dubbed the No. 8 team in the state in the 5A class before Demopolis came to town and beat the Eagles 38-13. Now, Calera must regroup and get ready to take on upstart Jackson-Olin. While the Mustabgs sport an impressive 3-1 record, their three wins have come against Woodlawn, Central-Tuscaloosa and John Carroll, who have a combined record of 1-13 heading into Week 6. With the prospect of a bye week looming in the immediate future, Calera should be more ready to play this week than a week ago, and the Eagles will take care of business. Calera 38 – Jackson-Olin 21.

This might make some people in Montevallo unhappy, but hey sometimes you need to ruffle some feathers. The Bulldogs to this point in the season have essentially held serve. They have played three teams to date that they have been significantly more talented than, and one team, American Christian, that they matched up well against. This week Montevallo will run into an offense that can score points in bunches just like it can. Bibb County, behind the play of quarterback Matthew Hiott and running back Will Moore, is averaging 39 points per game to date and giving up 24, which is nearly identical to what Montevallo has done through four games. While Zac Oden and company aren’t going down without a fight, this is the week the Bulldogs fall from the ranks of the unbeaten. Prove us wrong, Montevallo. Bibb County 49 – Montevallo 42.

After being shut out in the first game of the season, Vincent has posted points in every game since against some of the top teams in the 2A class. The Yellow Jackets have been the victim of a tough front half of the schedule, and that won’t be different this week against a Sumiton Christian team that is averaging 46 points per game. Sumiton Christian 42 – Vincent 21.

By BAKER ELLIS / Sports Editor The following are scores from games that did not make stats available at the... read more