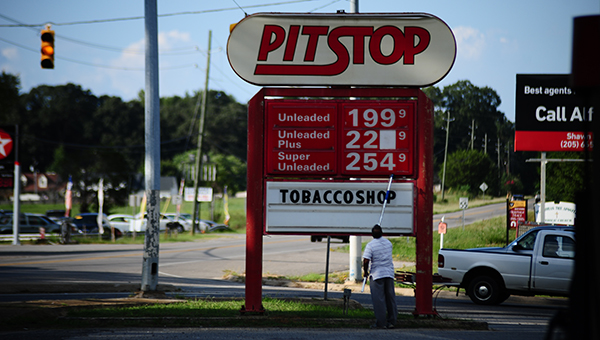 A gas station attendant is seen changing gas prices on a sign at the Pit Stop gas station in Montevallo on Monday, Sept. 19. (Reporter Photo/Graham Brooks)

Colonial Pipeline employees, as well as local, state and federal officials have been working since Sept. 9, to repair a gas leak that has impacted millions of residents throughout the southeast and east coast, but what should residents of Shelby County expect over the course of the next week, geographically being the closest to the actual spill site?

The states most affected by the pipeline spill include Alabama, Georgia, Tennessee, South Carolina, North Carolina and Virginia and the majority of those states have seen gas prices increase gradually and have experienced gas shortages since the leak was discovered Sept. 9.

According to GasBuddy.com, gas prices in Nashville, Tenn., and Asheville, N.C., have steadily risen since Sept. 9.

Asheville has also seen a spike in gas prices, as the average price per gallon of regular gasoline is $2.25 as of Sept. 20, an average increase of 24 cents since Sept. 9.

Although gas prices tend to be increasing in some major cities in affected states, one gas station owner in Shelby County does not believe the County will be hit hard with price increases or shortages.

Jay Modi is the owner of the Chevron gas station located at 4654 Shelby County 17 in Helena, located just a few miles from the spill site.

“I have not changed my gas prices since last week,” Modi said in a Sept. 19 phone interview.

The Chevron in Helena currently had a price of $1.99 per gallon for regular unleaded gasoline on Sept. 19, and Modi said it has remained that price for the last few days, despite the continued shutdown on Colonial Pipeline Line 1.

“I actually bought gas from my distributor today as a matter of fact,” said Modi. “I believe my distributor I buy from is very good and I trust them during times like this. In the past they have done a good job if any problems arise but I bought 6,000 gallons (of gas) today.”

The distributor for the Helena Chevron is Moore Oil Company based out of Birmingham and Modi said although he was not able to buy as many gallons of gas like normal, he said he was assured a gas shortage would not be an issue.

“Although I wasn’t able to buy as many gallons I still wouldn’t call it a shortage,” said Modi. “It’s more like we are rationing what we have. It’s like if you’re used to eating four burgers a day, you might have to cut down to eating two a day.”

As far as gas prices increasing, Modi said prices might go up anywhere from 7-10 cents max at his station, but it will not be a drastic increase like other cities in different states are seeing.

Colonial Pipeline officials announced on Sept. 20, that the restart of Line 1 is expected to return to normal on Wednesday, Sept 21.

Pictured is a diagram of the bypass installed by Colonial Pipeline, in order to restore function to the Line 1... read more