Luther Jarmon, Jr., president of Helena Kiwanis Club, recently related some of his memories of attending Tuskegee Institute where he matriculated in 1972.

“One August morning in 1967, my bags were packed and I was as excited as a fox in a henhouse,” he recalls. “I said to myself, ‘I have arrived!’ The only students on campus at the time were band students and athletes. I would be playing trombone in the Marching Crimson Piper Band.” 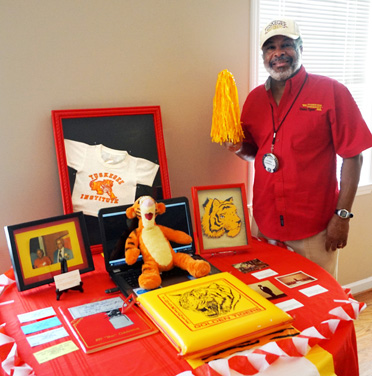 During Jarmon’s freshman year the band traveled wherever the football team went.

“We also went on a concert tour through Alabama, Georgia and Florida,” he said. “After graduating, I never picked up the trombone again; however, one of the highlights of being in the band was being student conductor for the annual spring concert.”

Jarmon began Tuskegee as an electrical engineering major, but changed to business management.

“Life at Tuskegee was fun,” he continued. “No curfew, no drinking limitations and no traveling limitations. One reason it was so fun was that Tuskegee had students from all over the world and some of the prettiest girls I ever laid eyes on.”

“When the weather started to warm in the spring, guys would target people at random, chase them down and throw them into the fountain. That lasted until one young female victim called home and told about how her ‘do’ was destroyed when she was thrown into the fountain,” he said.

After that irate parent complained so much, the fountain was demolished. The other iconic structure, the “Ignorant Bench,” was where guys hung out during the day between classes.

“When people passed by on their way to or from class, the guys would “crack” (harass) on them. Anyone was fair game. My wife claims I was sitting on the ignorant bench the first time she saw me,” Jarmon said, “But I beg to differ. I think it was in a more ‘sophisticated’ atmosphere.”

Another thing Jarmon remembers about Tuskegee was the food.

“Thompkins (dining) Hall made some of the best meals you ever tasted,” he said. “They made stuff that I didn’t even like taste so good.

“Other than being in the band, the best thing was meeting my wife, Carnella. We married as students.”

In December 1997, Jarmon heard a radio ad about a Kiwanis Club collecting toys for children.

“I was on the interstate headed home and turned around because this interested me,” he said. “During this event a Kiwanian invited me to one of their meetings and I joined in 1998.”

Luther Jarmon, Jr., worked in the insurance industry for over 30 years as a claims analyst.

His daughter, also a Tuskegee graduate, started a family and moved to Helena. She convinced her parents to move to Helena in 2013. A decision, he says, he has not regretted!