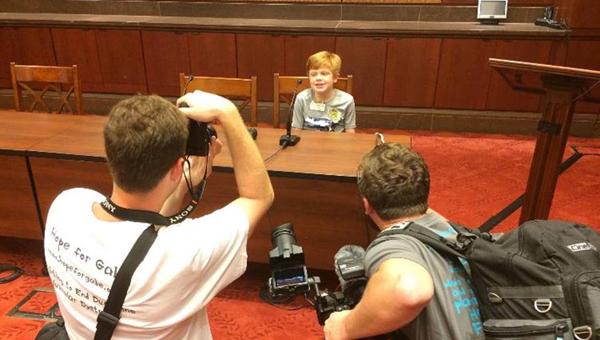 Gabe Griffin, a local 11-year old who suffers from Duchenne muscular dystrophy, prepares to speak to a room full of Congressional staffers on July 26 at the U.S. Capitol in Washington, D.C. (Photo by Andrew Garza)

A new drug that has gained approval may not help Gabe Griffin, but it could be a step in the right direction.

Exondys 51 is specifically intended for patients who have a confirmed mutation of the dystrophin gene amenable to exon 51 “skipping,” which affects about 13 percent of the population with DMD, according to an FDA press release.

Scott Griffin, Gabe’s father, said in a press release that supporters of the Hope for Gabe Foundation, which has worked for several years to educate the public and increase awareness about Gabe’s condition, think the same technology used to develop the recently approved drug can be tweaked to help Gabe.

“This is the launch of the moonshot we need in the Duchenne community,” Scott Griffin said. “Today we thank the FDA for getting it right on science and approving Exondys 51. We will keep pushing for Congress to pass the 21st Century Cures Act with language…which address the approval of follow-on treatments using the same underlying technology.”

DMD is a rare genetic disorder characterized by progressive muscle deterioration and weakness. It is the most common type of muscular dystrophy.

The first symptoms are usually seen between 3 and 5 years of age, and worsen over time. The disease often occurs in people without a known family history of the condition and primarily affects boys, but in rare cases it can affect girls.

DMD occurs in about one out of every 3,600 male infants worldwide.

People with DMD progressively lose the ability to perform activities independently and often require use of a wheelchair by their early teens. As the disease progresses, life-threatening heart and respiratory conditions can occur.

Exondys 51 was approved under the accelerated approval pathway, which provides for the approval of drugs that treat serious or life-threatening diseases and generally provide a meaningful advantage over existing treatments.

“Patients with a particular type of Duchenne muscular dystrophy will now have access to an approved treatment for this rare and devastating disease,” Janet Woodcock, director of the FDA’s Center for Drug Evaluation and Research, said in a press release. “In rare diseases, new drug development is especially challenging due to the small numbers of people affected by each disease and the lack of medical understanding of many disorders. Accelerated approval makes this drug available to patients based on initial data, but we eagerly await learning more about the efficacy of this drug through a confirmatory clinical trial that the company must conduct after approval.”

Gabe and his father Scott recently traveled across the country raising awareness while three cyclists pedaled their bicycles over 2,100 miles in just 11 days alongside.  Ride4Gabe, as it was called, generated over 29 proclamations raising awareness, including one signed by 28 members of the U.S. House of Representatives.

Michael Staley first met the Griffin family when he was chief of staff to their U.S. Representative, devoted his life to fighting to end Duchenne, and completed his second cross-country bicycle ride to raise awareness in early August as part of Ride4Gabe.

“Just as the first drug approval in the 1980s did for AIDS, this approval for Duchenne will hopefully lead to the translation of Duchenne from a death sentence to a manageable condition,” Staley said. “This first drug approval will spur public interest, new research and additional investment in the Duchenne drug pipeline.”