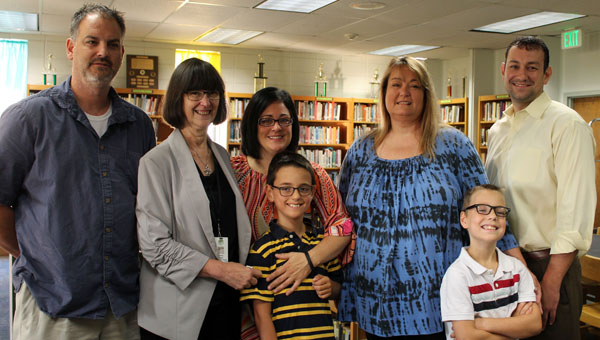 Marylou Russell poses with some of her family who joined PHS Staff to surprise Russell with a retirement breakfast on Aug. 31. (Contributed)

“Where is Marylou?” was the slogan chosen for a T-shirt commemorating the retirement of PHS Registrar Marylou Russell because this question is probably the most frequently asked question at Pelham High School. T-shirts were worn by PHS faculty and staff to surprise Russell on Aug. 31—her very last day of work.

After 28 years of keeping so much on track at PHS in a variety of positions from substitute teacher to her current position of registrar, Marylou Russell will be missed—greatly! Because Russell had served in so many capacities, her job—and her natural inclination to be a problem solver and a doer—kept her hopping from one location to another throughout the building. Everyone asks, “Where is Marylou?” because we all depend on her expertise so much.

“This is a question we will be asking a lot in the future,” said PHS teacher Julie Nelson.

“In order to replace Marylou, you’d have to hire someone to follow her around and work with her for two years to know everything that she does—and they still wouldn’t know all of the school history that she knows,” said PHS School Resource Officer James Chapman of the Pelham Police Department.

“Marylou has tried to write down everything she can think of,” said school secretary Debbie Adams, “But I’m sure she’ll be remembering duties to add to the list long after she leaves us!”

I taught three of Russell’s four children who all graduated from PHS in the classes of ’88, ’90, ’97 and 99. All of Russell’s children shared her work ethic and they have all prospered.

“All four of my children received academic scholarships and three had athletic scholarships as well,” said Russell. “Pelham High School is a great place to get a quality education and make opportunities.”