NORTH SHELBY – Two sisters at Oak Mountain schools are excelling at twirling on a national level. 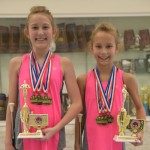 The wins qualified them to compete in the National Intermediate and Pre-teen Pageants held annually at the University of Notre Dame.

At the national competition, Sally Otts placed fifth overall in the intermediate division, while Susan Otts placed fourth in the beginner division.

Sally Otts said the competition was fun even though participants wake up early and compete all day.

Susan Otts said part of the judging in the competition is based on interviews, where she was asked about books she has read, her start in twirling, and even what the judges would have if they came to her home for a meal (“A steak dinner,” Susan said).

While it was Susan’s first time to compete in nationals, Sally competed last year.

Also, the team the sisters compete with, Forte Atlanta, which is coached by Colleen Murphy, won the beginner national title at the 2016 America’s Youth on Parade USA and World Twirling Championships.

Sally Otts has been twirling for nine years. She got her start when her mother, Anne Otts, who twirled in high school in Florence, took her to an after-school recreation class, where she was sized for a baton.

“I loved it,” Sally Otts said.

They will continue practicing, together, until the beginning of the next competition season, which will begin in March 2017.

“Once that competition happens, they just keep on coming,” Sally Otts said.

By SABRINA ZIZO / Community Columnist On Monday, Sept. 12 from 11 a.m.-4 p.m., University of Montevallo students had the... read more