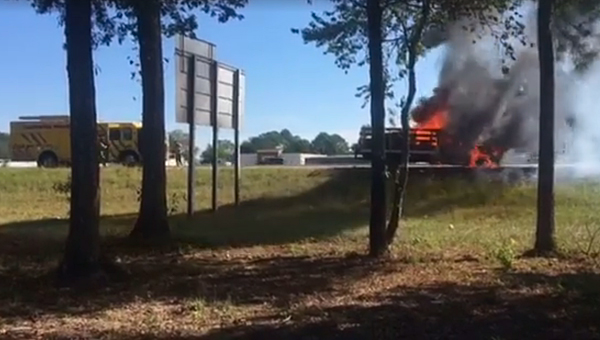 Alabaster firefighters arrived on the scene of a truck fire on Interstate 65 southbound near the Shelby County Airport exit. (Contributed)

ALABASTER – The Alabaster Police Department was forced to close the southbound lanes of Interstate 65 on the morning of Sept. 20 after the Alabaster Fire Department responded to a truck fire near the Shelby County Airport.

As of about 10 a.m., both southbound lanes of I-65 had been reopened to traffic, but there were still heavy traffic delays in the area.

At about 9:45 a.m., the Alabaster Police Department was forced to reroute traffic off of I-65 as crews worked to extinguish a pickup truck engulfed in flames on the shoulder of I-65 southbound just before the airport exit.

Firefighters were able to extinguish the blaze, which appeared to be in the bed of the truck, shortly after arriving on the scene. No injuries were reported in the incident.