Over the past three years, the University of Montevallo has seen an expansion of food services.

Chartwells was introduced in 2013 as the operator of Falcon Foods in Anna Irvin Dining Hall. Moe’s Southwest Grill, Einstein Bros. Bagels, Chef Jet Noodle Bowl and Starbucks are also food options at the university that have only been introduced in the last three years. 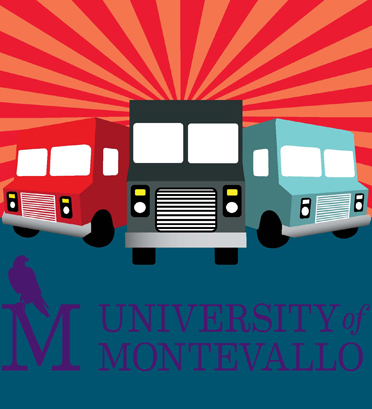 This Fall 2016 semester, there will be another food option, introduced by the University of Montevallo’s Office of Partnerships and Outreach, beginning Sept. 15.

There will be one food truck every Thursday from 11 a.m.-1 p.m. located at the Student Activity Center.

Over 21 food trucks will offer students, faculty and staff of the university and Montevallo community members an even wider range of food options.

The food truck that is coming each week will not be announced until Thursday morning between 8-9 a.m., a few hours before it arrives.
However, the University of Montevallo’s social media will release teasers throughout the week to give the public hints on which one to expect; a social media initiative with the goal of increasing UM’s online presence.

Although, flex points will not be accepted, deals and giveaways will be announced via a code on UM’s social media for certain food trucks.

Kelli Holmes, the Director of Partnerships and Outreach, explains her excitement on what the food trucks will bring to the city of Montevallo: “To me, I think the most exciting part of bringing food trucks on campus is the opportunity we have to engage our local communities with our beautiful campus, in a nontraditional way. For people who’ve felt they haven’t had a reason to come on UM’s campus, hopefully the food trucks will be the reason.”