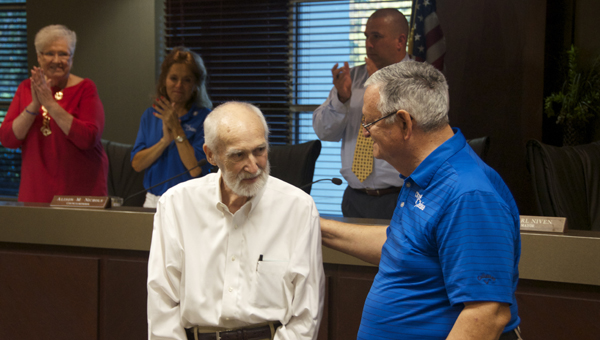 CHELSEA – The Chelsea City Council approved a resolution at a regularly scheduled meeting on Tuesday, Sept. 20, to name the new community center road from County Road 337 to the new Chelsea Community center, “Wanninger Way,” in honor of Bob Wanninger.

“He truly is one of the founding fathers of our city and I wanted to recognize him in a way that makes him feel very special,” said Chelsea Mayor Earl Niven.

When called up to hear the announcement Wanninger, who was completely shocked by the touching tribute, could only muster up the question, “Yes sir?”

“This has been a friend of Chelsea for 20 plus years,” Niven said. “Bob, we love you here in Chelsea and we want to show you how much.”

Niven then made the announcement and went on to say, “If you’re in favor of this resolution please stand,” to the council and crowd that was already standing.

“You are a jewel in Chelsea and well respected by us all,” Niven said. “If they don’t love you, they don’t know you.”