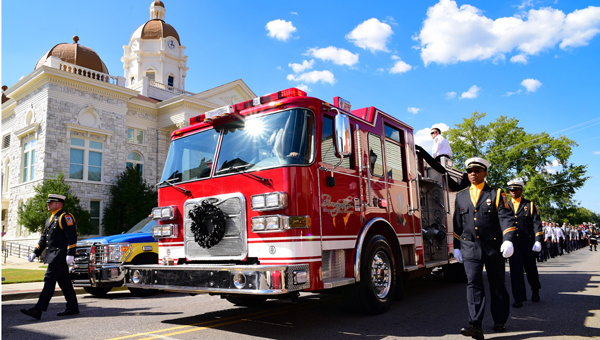 A fire truck carries fallen firefighter Grant Cole on his last ride through the streets of Columbiana as fellow firefighters and emergency workers walked alongside and behind. (Photo by Keith McCoy)

COLUMBIANA – For a brief moment on Tuesday, Sept. 20, Main Street in Columbiana was the scene of an emotional procession. Family members, firefighters and other emergency personnel marched slowly behind a fire truck carrying a flag covered casket, which held the body of Grant Andrew Cole.

Cole, a long-time member of Birmingham Fire and Rescue, Southeast Shelby Rescue and Columbiana Fire, passed away at the young age of 49 on Friday, Sept. 16, which led to an emotional, but incredible funeral service.

The service saw family and friends from all walks of his life in attendance, as well as over 150 firefighters and emergency workers.

As he took a long pause choking back tears, one of Cole’s fellow firefighters Jay O’hern said, “The first meaningful thing I told him, that he told me years later he never forgot was that if you find yourself lucky enough to work at station 20 you can be proud, but it comes at a price. There are long nights, hot fires, wet gear and cold suppers and you have a reputation to uphold. Through these halls have lived and worked some of the greatest firefighters the fire service has ever seen. Do not take it lightly, I told him, and he did not.”

O’hern said station 20 was the only station Cole ever knew, as he made working for them and Birmingham Fire and Rescue his career. Cole also worked for Southeast Shelby Rescue and Columbiana Fire, which extended his second family and spread his infamous smile.

Although he built such a large second family there was never any doubt that his wife, Rena and three kids Ashlee, Rachel and AJ were his number one priority.

“I’ve said a lot about his job, but that is not what defined Grant the most,” O’hern said. “If you know Grant then you know his dear family was first and foremost in his life. He would’ve walked away from it all if he thought that’s what the Lord would have wanted him to do for his wife and children.”

“To Rena, his high school sweetheart, you were his best friend and everyone knew you were the love of his life.”

Rena, who sat front and center, clutching her kid’s hands with Cole’s station 20 fire helmet sitting in her lap and his flag covered casket less than 10 feet away, was swept over with emotion.

“Grant tried so hard not to brag too much about his kids at the station, but he couldn’t help it,” O’hern said. “Anytime Ashlee or Rachel did anything successful, Cole would gleam with pride. And AJ, his only son, you would’ve thought the kid never did anything wrong in his life. I even kidded him one day that AJ stood for ‘Almost Jesus.’”

This comment drew loud laughter from the emotional crowd as if they knew exactly what O’hern was speaking of.

“To know Grant is to like Grant and be his friend,” O’hern said as he apologized for once again choking up. “I truly can say I never heard one ill word spoken about Grant, not one.”

A couple of more people spoke words of remembrance before Cole’s son, AJ, stepped up and recited a poem that Cole himself also recited at his father’s funeral.

Following a recessional, over 140 firefighters and EMS workers lined up behind a fire truck that held Cole’s American flag covered casket as he took his final ride on one of the giant red trucks.

They walked slowly to the tune of bagpipes and a drum for a little less than one mile from First Baptist Church to Pinelawn Gardens Cemetery in Columbiana.

Along the way a man sitting on the sidewalk of Main Street stood up, removed his hat and placed it over his heart as the procession walked by, and a little further up the road a woman who was stopped by the procession got out of her car, stood up and placed her hand over her heart. Both of which had never met the fallen firefighter, but knew something important was taking place.

They arrived at the cemetery and fellow firefighters carried his casket to the gravesite as bagpipes played in the distance. As the music stopped, the American flag was folded up and handed to Rena Cole, who was clutching AJ’s hand.

A recording followed over the firefighter radios, which brought several people to tears.

“Grant Cole is officially released of his duty,” it sounded, which was promptly followed by three final rings of the fire bell that Cole had heard so many times over his life. 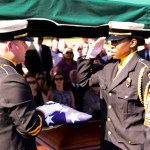 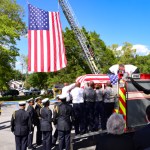 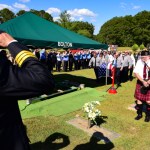 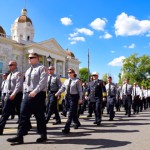 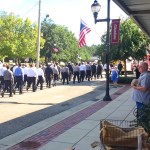 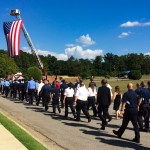 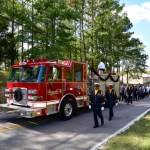 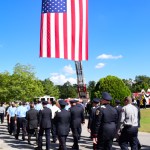 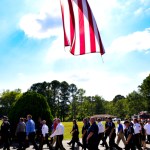