Photos by Jess Henderson, Owner of Love Ya Jess Photography

But for women dealing with infertility, that verse can sting and bring more questions than answers. All of those emotions, frustrations and pains are things Amy Metz Walker knows all too well. 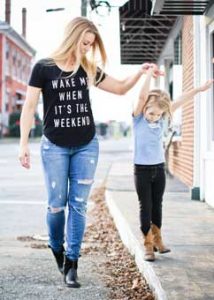 Walker supports other families looking to adopt through her non-profit foundation Custom Made Kid.

Walker, a Hoover resident, has struggled with infertility for more than a decade now. “There’s not an area of your life infertility doesn’t touch,” she says.

She openly shared her journey and faith through her blog, where she soon grew a good readership — to her surprise. “I thought just my mom and best friend would read it,” she says with a laugh.

As she blogged about her struggles with infertility, it didn’t take long for people to start suggesting she should adopt. But, she didn’t want to hear that.

“I said, ‘God’s going to have to drop a baby in my lap if that’s what he wants. That was selfish,” Walker recalls. “I wasn’t opposed to adoption. I just felt like that was giving up on my biology. I kept making it about me.”

One of her readers in Texas, a longtime friend, took that as a challenge and said, “If I ever find a family with a child, I know who I’m calling.”

Fifteen days later, Walker got a call about a baby: her daughter Landry.

“I thought of the story of Abraham and Isaac: He was an answer to their prayers and then they were asked to sacrifice this child,” Walker explains. “I asked God, ‘Are you asking for me to lay down what I thought motherhood would be like,’ and he was.”

Of course, it hasn’t been all rainbows since the adoption, and there are still times she thinks about her struggles. But, she knows it’s all part of God’s plan.

“When people say I got by easy because I didn’t give birth to her, I tell them I longed for her for years, and I labored for her with tears,” Walker says of her now 4 1/2-year-old daughter. “She couldn’t be more mine if I had her myself.”

Just looking at Landry, people would think they saw a resemblance to Walker.

“I felt confirmation throughout,” Walker says. “She has a birthmark just like mine that was a mirror image to me. Even my parents say she’s a little Amy Metz. I would joke and say if I could have custom made a kid, it would be her. It’s not about perfect kids or perfect people: It’s about giving me the perfect child for me.”

Walker wanted to find a book that explained the special love she had for Landry, but she couldn’t. So, she decided to create one.

“This isn’t just our story: It’s every child’s story,” Walker says. “God uniquely designs each of us for a purpose.”

Her book — which went to print in August and will be available this fall — shares how children can grow in a mother’s stomach or heart and that the child is loved no matter how they got to where they are.

“If one kid reads this book and feels special, that’s amazing — even if it’s just my daughter if she’s questioning her worth,” she says. “That’s why I did it.”

The book is fully illustrated and has been quite a while in the making, although Walker didn’t know that. The beginnings of this book actually started back when she was in high school.

Walker met a girl on her school bus when she was in the ninth grade and started up a conversation. “I said I wanted to be a writer, and she said she wanted to be an illustrator,” Walker recalls.

So when she needed someone to illustrate her book, Walker knew who to reach out to.

And with the creation of the book idea came the non-profit foundation, Custom Made Kid.

In addition to the book, Walker came out with a Custom Made Kid T-shirt line, which can be purchased online. All of the proceeds from Custom Made Kid go to support people in the adoption process. It was her way to give back to others she could truly relate to.

She also partners with families for fundraising events, since it can be difficult for people to ask for money for themselves to cover adoption costs, which can range from $20,000 to $50,000.

The event gives couples a way to share their story and also sell T-shirts to raise money for their adoption. They can also have people order shirts off of the Custom Made Kid website and use a code for that family.

“The shirt idea is a way to ask for help and give something tangible in return for support,” Walker says.

She remembers back to when she first made the decision to adopt and knows how difficult it can be, especially the financial aspect.

“If I had let my brain outweigh my heart, the money would have been hugely prohibitive,” says Walker, who had a small window of time to raise the funds for her adoption. “I don’t want other families to say no to their epic love story because of costs.”

Her experiences have given her a unique perspective to share with others going through similar journeys.

“I can speak from both sides: from the side of not wanting my life to go that way to feeling blessed beyond my wildest imagination with adoption,” Walker says. She wants to take her experiences and encourage people, no matter where they are in their journey. And as for the path she took, she wouldn’t change it at all.

“Every second of my grief during the infertility period, I would do it all over again to have her,” Walker says. “Even now, the wound is still there, but I would never change a bit of my story.

For more information or to support Custom Made Kid, visit Custommadekid.com.