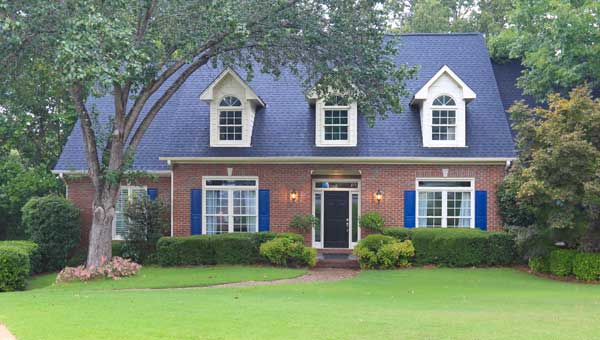 They enjoy their cul-de-sac home in the Willow Trace neighborhood.

Rod and Lissa Hines remember when Highway 150 in Hoover was a two-lane road and the development of Trace Crossings was in its early stages.

“At the time we decided to build in Trace Crossings, it seemed a bit remote, but we liked the fact that Trace Crossings Elementary School had just opened and Hoover High School would be opening the following year,” Rod says.

For Lissa, a veteran educator and counselor in the Hoover School System, quality schools were top on the priority list in seeking a location to build. The appeal of the new Trace Crossings development and an empty cul-de-sac lot made the Willow Trace neighborhood a perfect site for the Hines to choose.

“Our home was designed and built by Wood, Powers and Hastings. We also liked that the plans gave us a large wooded back yard. So, we have a great deal of privacy,” Lissa says.

Twenty-three years later, the Hines still love their home and have made changes to it with updates and renovations.

Lissa, now retired but working as a part-time counselor at Deer Valley Elementary School, says the addition of a screened-in porch increased their living space and allowed them to branch out from the kitchen.

“We enjoy having family and friends over, so that gave us more room for folks to gather. Dinners on the porch with good food and interesting conversation are some of our most special times,” she adds.

The original porch was a smaller, open deck, and when discussions to renovate came up, Rod says they decided to enlarge the space and screen it in, rather than make it into a sunroom.

“We liked the idea of an outdoor feel for the room,” he says.

A tile floor was added to enhance the natural aesthetic and to add function and durability. For great outdoor cooking, an open grilling deck was added. When it came to furnishing the porch, Lissa says the couple wanted it to be comfortable and inviting.

“The seating/conversation area of the room is a transitional style — sort of a classic and contemporary mix,” she explains. Lissa describes their style as on the eclectic side, saying she tends to like a more contemporary, minimalist design, while Rod leans toward a more rustic feel.

Their outdoor living area opens up into the kitchen with plants that bring the outdoors in, continuing the theme inside. The kitchen has seen quite a few changes during the years with new paint, tile floors, granite counter tops and cabinets that were given a facelift.

“We hired a carpenter to remove the kitchen desk and build a wine bar in its place. We are so glad we did, as we never used the desk. But now, with the wine refrigerator, glass racks and counter, it is much more functional,” Rod says.

The Hines continue to update and change other rooms in their Trace Crossings home as their needs change.

“We wanted to move toward a more updated style, a little less fussy and more contemporary look with a grey and yellow palette. Our favorite new feature in the den is the fabric on the ottoman…it looks like real river rocks,” Lissa says.

For the dining area, it was time for a new table. “We just had a farm table built for the dining area. The carpenter was recommended by a friend, and the wood for the table is repurposed from a building on our friend’s family’s land,” Lissa says.

The Hines not only love their home in Trace Crossings, but they also love their community and neighborhood and say they would not want to live anywhere else.

“It is friendly, quiet and convenient to everything — schools, shopping, parks and the interstate,” Lissa says.

Next for the Hines’s renovation agenda is to update all the bathrooms and to add hardwood floors in the master bedroom continuing to invest in the home they love.