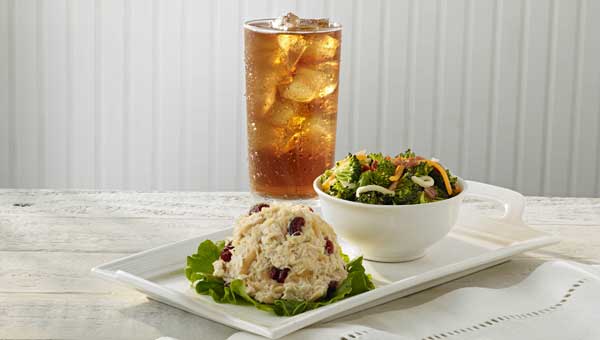 The Chick menu item comes with one scoop or sandwich and a choice of side or cup of soup.

When Stacy Brown opened the first Chicken Salad Chick in 2008 in Auburn, she made 40 pounds of chicken salad — and sold out in less than two hours.

The next day, she made twice as much — and sold out of that just as fast.

Now eight years and 54 restaurants later, Chicken Salad Chick just opened a new location in Riverchase — one with something special for Hoover-area residents.

It’s an opportunity for them to be the first to try some new menu items, just like those first customers in 2008.

The new restaurant — located at 3780 Riverchase Village, Suite 110 — is a test kitchen for the other Chicken Salad Chick locations, so customers will be able to try new things there first and help hone the product with feedback, says Scott Deviney, CEO of Chicken Salad Chick.

“It’s our opportunity to test a few things and see what the community would do with that restaurant,” he says. “And so far, the feedback has been unbelievable.”

All of the other Chicken Salad Chick locations have 15 standard flavors, but at the Riverchase location, they’ve cut that selection back to 10 to make room for new flavors.

“We added a new flavor to make it 11 total there — Lauren’s Lemon Basil, which is a really great flavor,” Deviney says.

“The toasting of bread has gone extremely well there, so we are looking to add that to the menu of four more stores outside of Birmingham,” Deviney says.

Another item — the chicken salad BLT — has been so well received that they expect to market that one more widely in the future too, he adds. “It’s been a phenomenal product that our customers love. I can see that one going throughout the franchise.”

And if anyone is wondering about the cookies, Deviney says there’s a chance to try a new one there, too.

“Stacy’s thought was always that everybody wants something sweet after a meal,” he says. “So we are testing out a two-bite sugar cookie with fresh butter cream icing.”

It’s probably the most controversial move of the new location, Deviney jokes, because they are testing it in place of their warm cookie of the day, an item available at other locations.

“That one was a different flavor every day, like chocolate chip or snickerdoodle,” he says. “The two-bite butter cream would be a potential replacement for those, if it is well received. Once we roll this into further test locations, we’ll continue to gather that data and see if costumers really want that different warm cookie every day or is this one is so good they are OK with just having it.”

“We added it to the menu board so that people know we have kid options,” he says, noting they offer mac and cheese and three sandwiches — peanut butter and jelly, turkey or chicken salad.

“We just kind of brought that to life on the menu at this store,” Deviney says. “And we’re working to gather customer feedback all the time on our new menu and design.”

The Chicken Salad Chick folks says that’s part of the “Southern hospitality” they are known for.

“So far, we’ve had a very positive reception at that location,” Deviney says.

The franchise now has four Birmingham-area stores — the Riverchase location, one in Homewood’s SoHo center, one in Southside and another at the Lee Branch shopping center. But Chicken Salad Chick is also looking at a few more locations in the area for potential expansion. Alabaster is one possibility, as is Trussville, Deviney says. “We’re constantly evaluating opportunities.”