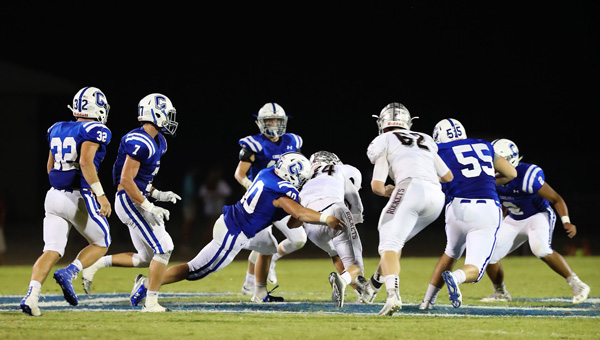 Several Hornets players swarm around the ball carrier as their defense was suffocating against the Gardendale Rockets in a big matchup on Friday, Sept. 23. (Contributed)

CHELSEA – Coming into their matchup with the 4-1 Gardendale Rockets, Chelsea was giving up 30.2 points per game and even though the Hornets were off to a 4-1 start as well, the defense had to step up if they wanted to beat a Rockets team averaging 31 points per game.

On Friday night, Sept. 23, they did just that. Chelsea saw great offensive performances from quarterback Matthew Marquet and running back Zalon Reynolds, but it was the defense that stole the show holding Gardendale to 21 points in a game the Hornets would go on to win 38-21.

“The story of the game was our defense,” said Chelsea head coach Chris Elmore. “They just kept battling against a great offensive team and made the stops when they had to. If they hadn’t I don’t know that we would’ve won that game, so hats off to the defensive staff tonight.”

Right from the start you could tell the defense came to play as they forced a turnover on downs during the Rockets first offensive possession.

After going three and out on their first drive of the game the Hornets would come back and put together an eight play 2:57 drive.

Chelsea had a third and 13 at one point on the drive at which point Reynolds reeled off his first big gain of the night going for 14 yards and a first down. Two combined runs for 17 yards from Marquet and another 11 yards from Reynolds led to a first and goal from the 10. It took one more play before Marquet ran in for his first of two rushing touchdowns on the night.

Gardendale running back Demetrius King had some tough runs and would help lead his team on a quick 60 yard touchdown answer to tie the game up at seven with 50 seconds left in the first quarter.

Chelsea came back with a 13-play drive, which eventually stalled out after several negative plays on their opponent’s 19-yard line. The Hornets were able to salvage a 39-yard field goal from Tyler Thomas to take a 10-7 lead.

The Chelsea defense stepped up and forced Gardendale to a fourth and two on the ensuing possession, which they converted, and two plays later found their way in the end zone to go up 14-10 and take their only lead of the night.

The Hornets would answer right back going on a six-play 69-yard drive in just 1:44 to take the lead back at 17-14. The drive was led by Marquet, who got loose for two big runs, one for 13 yards and another for 28 yards where he ran down the middle of the field and put a beautiful spin move on a linebacker to gain some extra yards.

He would add a 23-yard pass to senior wide receiver Lee Rickard to set up a first and goal from the two where Reynolds would pound the ball across the goal line.

Chelsea would force a turnover on downs from the Rockets and take a 17-14 lead into the half.

Coming out of the locker room both teams stalled on their first drive before the Hornets would go on a seven play 2:07 drive that looked to be over on a third and long play.

The Rockets would commit a crucial late hit penalty that set up Chelsea on the Gardendale 22. Two plays later, Marquet took the snap, gave a hard pump to his running back that everybody on the defense bit on, which left senior wide receiver Josh Gregg wide open for a 23-yard touchdown reception.

The Hornets would increase their lead to 24-14 and would never look back the rest of the night.

Gardendale would score on their next drive after a beautiful 46-yard pump fake pass of their own, but wouldn’t see the end zone again as the Chelsea defense really stepped up.

“We tackled well and that’s one of our team philosophies that we talk about daily, the defense just played so hard and I couldn’t be more proud of them,” Elmore said.

Two more touchdowns would be scored by the Hornets to win this one by a final of 38-21.

Chelsea will have a bye week on Sept. 30, but will travel to Region 3 leading Opelika on Friday, Oct. 7, in what will be their biggest game of the year thus far.

“They’ll be ready,” Elmore said. “It will take everything we’ve got, but our guys know what that’s about and that Opelika is a very good football team.”

By BAKER ELLIS / Sports Editor Stats from these games were not available at the press deadline.   Sumiton Christian... read more