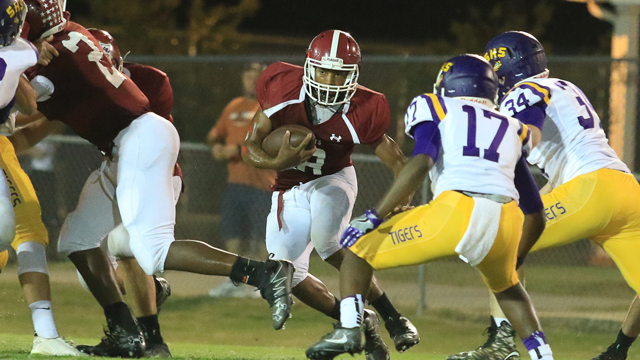 The Shelby County Wildcats pulled out the come-from-behind win on Homecoming over Springville on Sept. 23. (For the Reporter / Dawn Harrison)

It was Homecoming week on College Street for the Wildcats. It’s a span of five days where school spirit is running high, the community is rallying behind their team and the football game is the place to be on that small town Friday night – past, present and the future come together. It’s always fulfilling to win Homecoming and the Wildcats delivered versus the Tigers. As Friday night Homecoming activities come to a close, all will be well for the cardinal and white and the town that supports them.

“It was huge to get a win tonight,” Wildcats head coach Heath Childers said. “Our kids had a lot of opportunities to lay down after some things didn’t go our way, but they didn’t and fought hard. It was a big win for us.”

Coming off two unfavorable weeks, the Wildcats needed spark. They needed a win, but the Tigers may have had different plans. They didn’t go away lightly.

After two SCHS punts on as many possessions, the Tigers struck first when Jordan Byrd bolted over right end out of the “Wildcat” formation from the 23-yard line for the score. After the point after attempt, the Tigers held the 7-0 with two minutes remaining in the opening quarter.

If Springville had one goal, it was to stop the run and it did just that. SCHS couldn’t gain traction between the tackles or with the misdirection early on and Coach Childers tipped his hat to his opponent across the way.

“A coaching friend of mine told me early on this week that they’d show up against the run and play tough defense. We found that out tonight – it was like pulling teeth,” Childers mentioned.

The Tigers had the momentum as the Wildcats were forced to punt again from their own 31-yard line, but favor was on the side of SCHS as the ball nicked the heel of a Tiger defender and put SCHS back in business at the Tiger 40-yard line.

As the second quarter opened, Wildcat quarterback Chadwyn Russ connected with Jeremiah Crenshaw for a 38-yard toss. Four plays later, Keyvontae Mayfield rumbled in from the Tiger four-yard line. After the missed PAT, the Wildcats trailed 7-6 at the 10-minute mark.

On their next drive, as time clicked closer to the half, Russ then connected with Lamont Bush for a 31-yard slant toss to set the Cats up at the Tiger 27-yard line.

Four plays later, facing 4th and 5, Russ pulled the ball on a read option play around left end to get the crucial first down. It would be considered the misdirection play of the night, as the main Referee couldn’t locate the ball or the ball carrier until looking past the sticks where his colleagues spotted the ball Russ had tucked away.

If the opportunity in the first quarter Tiger punt was huge; the fourth down conversation from Russ was even bigger as it setup Mayfield charging in from the Tiger 2- yard line three plays later. The two-point conversion failed, but the Cats held the 12-7 lead.

After a blindside sack for a 16-yard loss from Wildcat defender, Chase Franklin, SCHS headed into intermission with the five-point lead.

SCHS punted its fair share Friday night and it was a result of a stingy Tiger defense that stuck to the plan of plugging the run and their offense keep hanging around as the second half opened up.

As eight minutes passed in the third quarter, Tiger quarterback Hunter Richardson connected with Peyton Weisskopf on a rollout and he bolted his way down the left sideline for a 57-yard score. Byrd took a direct snap on the next play for the two-point conversion to put the Tiger back in the lead 15-12.

Following the Tigers score, the Wildcats would convert on another 4th down conversion to keep a drive alive late in the third. Two plays later, Crenshaw emerged from the ashes of the misdirection from his own 36-yard line and no one the turf would catch him. The 64-yard dash would put the Cats back on top by three, 18-15.

It’s great to win Homecoming, but so is being the spoiler and Tigers made their case late when Richardson and Byrd connected on a trick play, scoring toss from the SCHS seven-yard while taking back the 22-18 lead the nine minutes remaining.

With just above five minutes remaining, the Wildcats needed an answer and Bush delivered with a run over right end on fourth and five to get his unit to the one-yard line. Mayfield then hit the end zone untouched for the score. With 5:09 left, the Cats held the 25-22 lead.

After a surprising Tiger punt with 3:38 left to play, the Wildcat offense nestled into victory formation to seal the Homecoming deal. 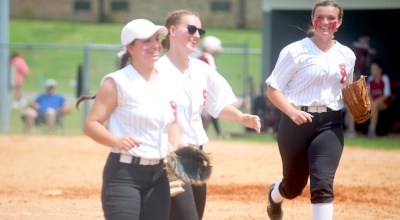 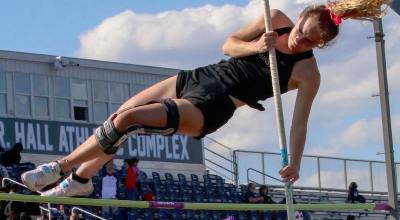 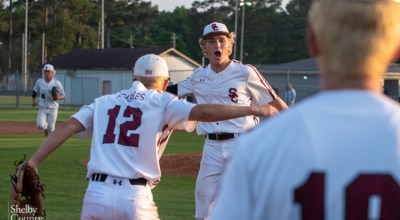 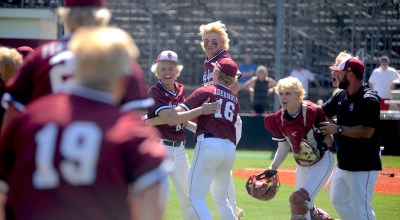