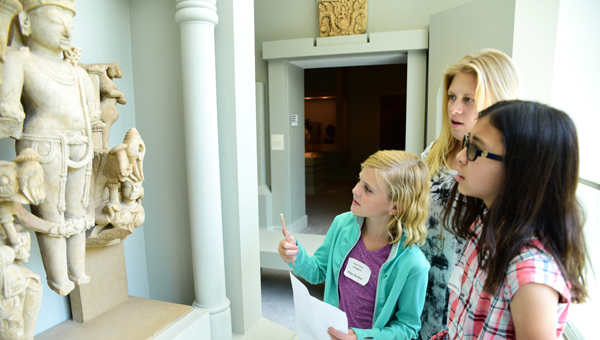 Mays Dunbar, Team Leader Cameron Kent and Jayden Mohprasithave of Hilltop Montessori School have a discussion about a sculpture at the Birmingham Museum of Art on Sept. 23. (Photo by Keith McCoy)

NORTH SHELBY – Students from Hilltop Montessori School in Shelby County and Cornerstone School in Birmingham are going beyond learning about cultures—they will create their own.

Fourth and fifth graders from the schools are collaborating with Phi Theta Kappa honor students from Jefferson State Community College on a project called “Digscovery,” which got underway Sept. 23 with the students touring the Birmingham Museum of Art to learn about different cultures.

“They’ll consider what do the artifacts tell us about that culture and their values,” said Libby Holmes, community outreach with Jefferson State.

The “Digscovery” project is designed to encourage students to think about how different people represent themselves and reflect on similarities and differences of things such as customs, clothing, items, etc. culturally.

Over the course of the next few months, each class will develop and create a culture from the ground up and will make artifacts representing that culture.

“They’re going to create a culture from the ground up,” Holmes said. “We’ll supply them with clay, string, jewels, whatever they need; and they will create their own artifacts and bury them on the other school’s grounds.”

The artifacts will be unearthed during an Excavation Dig Day.

Based on what they find, each class will try to interpret the culture they discover. Students will make presentations about what they “digscovered” at a celebration in their honor to be held at Jefferson State’s Shelby-Hoover campus in November.

Throughout the project, Jefferson State students will serve as tour guides, consultants, and advisors for the youngsters.

“We cannot wait for this project to unfold!” Jefferson State Associate Dean and Phi Theta Kappa advisor Liesl Ward Harris said. “What an awesome opportunity for these elementary students to get an idea of what it feels like to be archaeologists, historians, and curators. We also believe this is a fun way to expose them to concepts like understanding and acceptance of differences and learning to celebrate similarities at a young age. More importantly, we know they’ll learn more about each other and about themselves as well.”

Hilltop fourth grader Julia Gale said she enjoyed learning about British culture and may include elements of it in the culture created by her class.

“Maybe our culture could have a tea party day,” Gale said.

Prior to the tour of the museum, students were split into groups and performed “icebreaker” exercises.

Hilltop sixth grader Mark Underwood said students were given a variety of items and were tasked with working together to create the tallest tower possible.

“It was hard, but in the end, everybody came together,” Underwood said.

Hilltop faculty member Janet Lewis said she thinks the students will benefit from working with others they did not know beforehand.

“It is good to see the kids interacting with the kids from another school and learning about other cultures,” Lewis said.

The project is made possible through the generous support of Jefferson State’s Community Outreach Division, Cornerstone and Hilltop Schools, and a grant from Wells Fargo, who served as the luncheon sponsor at the Birmingham Museum of Art on Sept. 23.

Phi Theta Kappa is the international honor society of two-year schools and is the largest, most active honor society in the world.

Shelby County Board of Education receives President’s Award from AASB

The Shelby County Board of Education members received a President’s Award from the Alabama Association of School Board on Sept.... read more