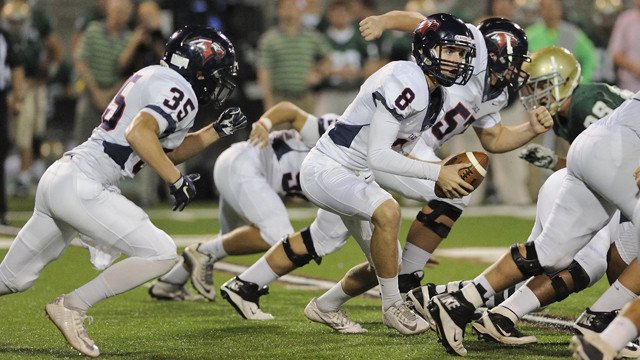 With a big region game coming this week against Hoover, can Oak Mountain keep its’ hot streak going? (File)

After a Week 6 that saw a number of teams take a huge step forward with key, non-region wins, we’re right back into the thick of region play heading into Week 7 with a number of playoff scenarios still possible. Heading into this Friday night there is one team sitting in sole possession of first place in its’ area, another with a share of first place, and a host of teams in the mix for a top spot. We’ve got eight games to get to this week, so let’s hit it.

The first of three key 7A Region 3 games this week features a reeling Jags team against the upstart Vikings from Huffman. After starting 3-0, Spain Park has lost its’ last two in a row and now sits at 1-2 in region play for the second time in three years. To keep its’ playoff hopes alive in one of the toughest regions in the state, Spain Park essentially has to have a win this week, as falling to 1-3 in region play all but rules the Jags out of playoff contention. Huffman is 2-1 in region play and has had each of its three region games determined by 10 points or less, and this game will likely be a close, defensive struggle. Coming off a bye week, Spain Park will come out rejuvenated and ready to roll. Spain Park 24 – Huffman 17.

The Warriors’ two losses have come by a combined five points, and even conceding the three-point loss to Mountain Brook two weeks ago Thompson should in all likelihood be 4-1 heading into this matchup with the Rebels. But, they’re not. The Warriors are one of the three teams in 7A Region 3 with a 1-2 record in region play, and Vestavia is another. The loser of this game will see their odds of making the playoffs drop significantly, while the winner’s future looks much more pleasant. Vestavia is a perplexing team that has given Huffman its only region loss to date, but also got manhandled by Oak Mountain and Spain Park. Like a number of games this week, this one could go either way and will likely be close. In the end, Mark Freeman’s bunch pull this one out. Thompson 17 – Vestavia 14.

A season ago Oak Mountain came up just short of knocking off the Bucs, and in the wake of a pair of region wins this season, the Eagles are riding high heading into their game with Hoover this season. Hoover is 4-1 this and has won its four games against Alabama teams by an average score of 33-6, and the Bucs are once again the cream of the 7A Region 3 crop. Oak Mountain might keep this one close for a half, but Hoover will get this win. Hoover 35 – Oak Mountain 17.

The Huskies are in for a brutal stretch of games over the next month, with Opelika, Wetumpka, Benjamin Russell and Chelsea all looming in quick succession. For a Helena team that had playoff expectations at the beginning of the season, the Huskies are going to have to figure out a way to steal a couple of these next four games, but that won’t happen this week against an Opelika team that has surrendered more than seven points just twice this season. Opelika 38 – Helena 16.

Coming off a pair of tough losses, another tough week for a Pelham team that is better than its’ record indicates is ahead. This Wetumpka team has proven consistently capable of lighting up the scoreboard, and Pelham won’t be able to keep pace. Wetumpka 45 – Pelham 32.

In the wake of getting a feel-good, come-from-behind win during Homecoming week last Friday night, Shelby County has regained a little of the momentum the Wildcats had after starting out hot at 2-0. If the Shelby County that stayed the course this past week against Springville shows up this Friday at Fairfield, the Wildcats will win. However, if the Shelby County that gave up 27 points to Moody comes to play, the Wildcats will fall to 1-3 in area play yet again. Which team will show up? Hard to say, but we’ve said all along this is the year Heath Childers gets this team to the playoffs, and to do that they need to win this one. Shelby County 27 – Fairfield 21.

With a resounding, convincing win over the fourth-ranked team in 5A last week, Briarwood is looking like a very attractive pick to make a deep run in the 5A playoffs. This Lions defense, giving up just more than eight points per game over their last four games, is the real deal, and the offense has proven to be much more potent in 2016 than it was a season ago. As long as the Lions can avoid a let down in the wake of their win over Mortimer Jordan, Briarwood will not struggle this week with a St. Clair County team that has yet to win a region game. Briarwood 28 – St. Clair County 6.

Zac Oden and company showed last Friday night why they are one of the top 3A teams in the state. With Oden under center, a formidable crop of wide outs and a defense coming into its’ own, the Bulldogs are rounding into the team we knew they could be at the beginning of the year, and a win over Bibb County will likely push them into the ASWA 3A top 3 this week. Greene County is not a pushover, and the Tigers are coming off a by week, but at this point there are only a handful of instances where picking against this Montevallo team is even an option. Montevallo 42 – Greene County 24.

For the first time since Oct. 11, 2014, the Vincent Yellow Jackets are going to win a football game this Friday night. Vincent is coming off a brutal four-game stint in which the Yellow Jackets have played some of the best teams in the 2A class in LaFayette, Lanett and Fayetteville along with talented 1A Sumiton Christian. Now Vincent is home for the first time in three weeks and is taking on a Woodland team that has scored just six points all year and is giving up nearly 44 points per game. Deandre Davis, Robbie Albright and company will get to do something only a few players on this active roster have gotten to do before, celebrate a win. Vincent 28 – Woodland 12.