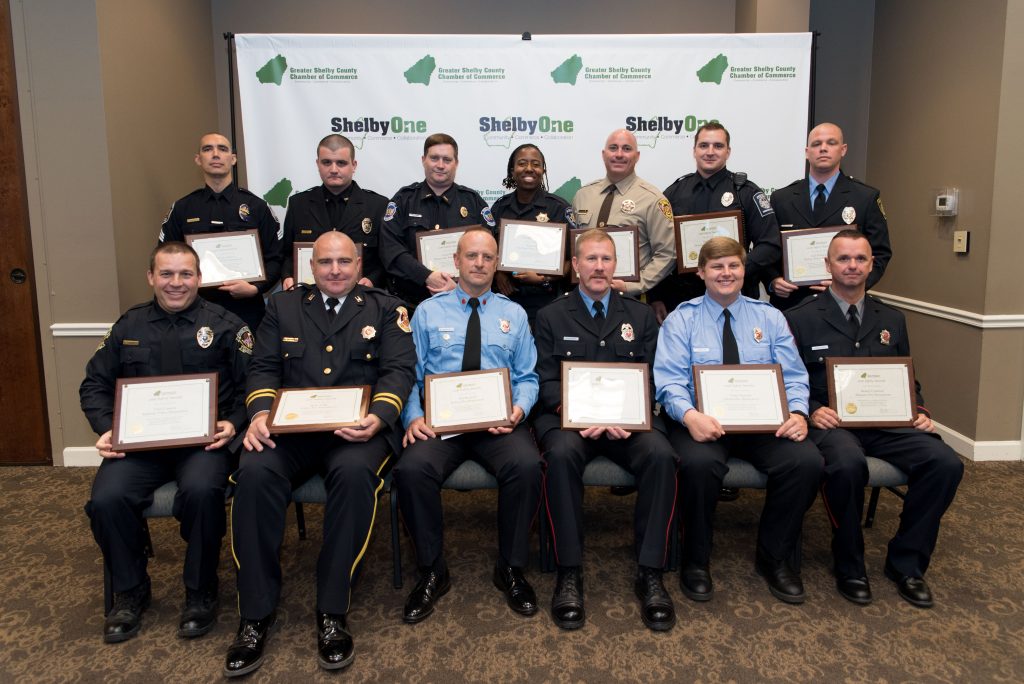 Agencies within Shelby County selected a police and firefighter of the year, and the recipients were recognized during the luncheon, which was held at the Pelham Civic Complex. Representatives from each department presented its nomination and explained why the individual was chosen.

Helena Fire Department Captain Chaed Agee presented Firefighter of the Year to Bill Mayfield, a volunteer firefighter who moved to Alabama from Colorado. 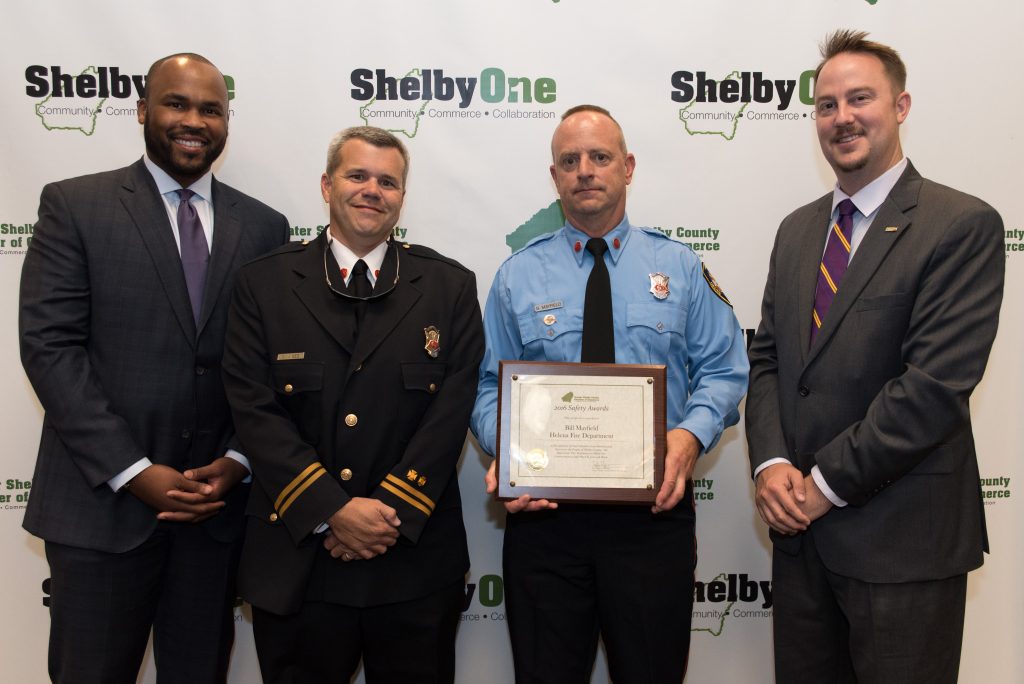 Firefighter of the Year for the City of Helena is awarded to Bill Mayfield (second from right).

“He showed up one day wanting to know about the Fire Explorers program for his son,” Agee said. “He mentioned that he has some experience in fire, and as we started talking I found out that he actually has 29 years of experience as a firefighter, he’s a registered nurse and he moved to Alabama to take a position as the emergency preparedness coordinator at UAB.

“After learning about his experience I said, ‘How would you like to be a volunteer firefighter?’” Agee said.

Agee said Mayfield has brought a wealth of experience to the department and has helped grow the department’s Fire Explorers program. 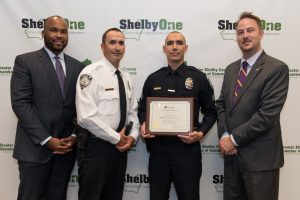 Police Officer of the Year for the City of Helena is awarded to Charles Hudson (second from right).

“He keeps his head when everyone else is losing theirs,” Folmar said.

Folmar recalled a wreck where the driver’s left arm had been severed at the elbow. When Hudson and two other officers arrived on the scene, Hudson rushed to check on the driver while the other two officers worked to secure the scene and locate witnesses.

“The driver was bleeding out so Charles used a tourniquet to stop the bleeding until paramedics arrived on the scene,” Folmar said. “He had just learned how to use the tourniquet about two weeks prior, but the entire time he kept his cool. Now, I’ve seen the body camera video from that day, and trust me it’s not something anyone wants to see.”

Palmer said Perkinson has been a part of the Pelham Police Department for a little more than two years, but he’s already made a major impact on the department.

He works with great enthusiasm and is a valuable part of the department’s Tactical Operations Unit.

“He’s observant of his surroundings and he was instrumental in a case on July 31, 2016,” Palmer said.

After a phone call from a concerned citizen, Perkinson and other officers were dispatched to a hotel, and while dealing with the suspects, Perkinson noticed what appeared to be castor beans, which naturally produces a highly toxic and lethal poison called ricin. Just one castor bean has enough ricin in it to kill an adult in a few minutes.

“The FBI was contacted and an investigation started,” Palmer said. “I can’t go into much detail because this is still an open case, but the suspects were charged with conspiracy to commit murder are currently awaiting trial.

“This investigation was initiated and brought to a conclusion as a result of Carl’s keen observation skills and diligence. He helped stop individuals who conspired to murder a man. We are so proud of Carl.”

Reid said Ingleright, who has been a part of the Pelham Fire Department since 2006, is a part of the department’s dive team and assists Alabama State Troopers as a fire medic.

Alabaster Fire Chief Jim Golden presented Firefighter of the Year to Robert Crawford, who joined the department in 2014. Golden said Crawford is a “shining example” of someone with a servant’s heart.

He told the story of what happened when Crawford and other firefighters were dispatched on a welfare check last fall. A welfare check happens when the friends or family of an individual can’t get in touch with their loved one so they call on first responders to check on them.

In this case, a foster mother of six died in her home while all six foster children were there with her and her husband was at work.

“She had been dead for hours and the children were just there,” Golden said. “He stayed for hours caring for the children – changing diapers, feeding them, playing with them and even reading bedtime stories.

“All too often we hear about what’s wrong in the world, well this is an example of what’s right in the world.”

Alabaster Deputy Chief Jeff Anthony presented Police Officer of the Year to Chris Cannon, who has 12 years of experience, including five years as a part of the Shelby County Drug Task Force.

Anthony described Cannon as someone who is motivated, proactive and a valued member of the team. He has received multiple commendations throughout his career and led an effort to recover multiple stolen guns, narcotics and a pipe bomb earlier this year.

“We are proud to work alongside a professional such as Chris,” Anthony said.

Other Firefighters of the Year were Calera’s Ryan Tallie, Chelsea’s Taylor Gunnels and Columbiana’s Brett Ashworth.

Back row from left: Police officers of the year Charles Hudson of the City of Helena, Robert Grant of the... read more