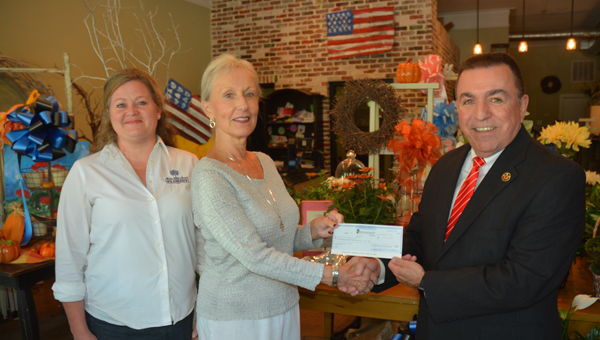 Kelly Burley, left, of Main Street Florist in Mt Laurel and Sunny Gilliam presented a check for $1,403 to Shelby County Sheriff John Samaniego after more than 275 blue and black bows were sold as part of a fundraiser. (Photo by Stephen Dawkins)

“I thought, ‘I’m one person, but what can I do,’” Gilliam said she asked herself.

The answer to her question was selling blue and black bows to homeowners in her Highland Lakes neighborhood. As a result of the effort, Gilliam and Kelly Burley of Main Street Florist in Mt Laurel presented a check for $1,403 to Shelby County Sheriff John Samaniego on Sept. 23.

Gilliam approached Burley about producing the bows and placed an initial order of 330 bows. More than 275 have been sold.

Gilliam praised Burley for her willingness to help with the project, which was successful despite a shortage of blue ribbon across the country because of similar efforts.

“There are a lot of good people in this world,” Gilliam said.

Gilliam then went about spreading the word, including on social media.

She said she has heard positive feedback about the bows.

The bows, which are intended to be fastened to mailboxes, were sold throughout August but can still be purchased at Main Street Florist, located at 38 Manning Place in Mt Laurel.

Of the $10 price, half is designated for donation to law enforcement.

The donation was to the Law Enforcement Foundation.

Samaniego said the money would likely be used for Project Lifesaver, which is a program that enables law enforcement to quickly locate missing people who are identified beforehand as at-risk because of special needs or health conditions.

The Shelby County Sheriff’s Office uses tracking antennas to locate people wearing special wristbands. Officers are able to search from a SCSO helicopter at the same time as a ground search.

“We are very appreciative,” Samaiego said.