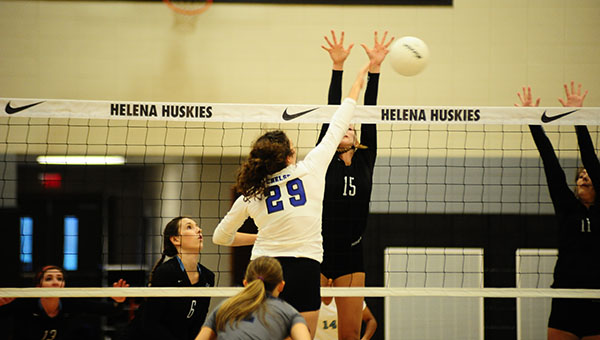 Chelsea’s Jules Hamer (29) led the Lady Hornets with 16 kills in a win over Helena on Tuesday, Sept. 27. (Reporter Photo/Graham Brooks)

HELENA–The Helena Lady Huskies and Chelsea Lady Hornets faced off for the second time this season in a region matchup and this time the Lady Hornets got the road victory by a count of 3-1 at Helena High School on Tuesday, Sept. 27.

Chelsea head coach Jessica Pickett said her team lost a tough match in five sets last time Chelsea played Helena and her team really wanted to try and avenge the loss from a few weeks ago.

“Well we lost to them in five sets at our place a couple of weeks ago so the girls really just wanted to get revenge from that loss,” said Pickett. “They fought real hard that game so it was a disappointing loss but to me, if they pulled stuff together and did the small things right and the things we worked on then I knew we could pull it out tonight. So they really did execute the game plan pretty well tonight.”

The Lady Hornets were led by Lexie Riggins who recorded 19 digs, Jules Hamer who finished with 16 kills, three aces and four blocks and Maurica Marsh who also recorded three aces.