COLUMBIANA – A 21-year-old Montevallo man will spend the next 20 years in prison after he pleaded guilty to his involvement in a 2013 armed robbery at a Montevallo apartment complex in which a Helena woman was shot and seriously wounded. 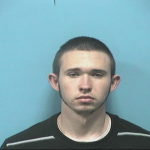 Terry Christopher Searcy, who lists an address on Roberlyn Lane in Montevallo, pleaded guilty to felony counts of first-degree robbery and first-degree assault during a late August hearing in Shelby County Circuit Court.

As a result of his plea, Searcy will spend 20 years in the Alabama Department of Corrections, and must avoid contact with the victims in the robbery. The 20-year sentence was the minimum allowed for a robbery in which a deadly weapon was involved, according to his sentencing documents.

In the Montevallo incident, Searcy and 20-year-old Kevin Valladares Gutierrez allegedly were attempting to steal marijuana from a man living in the Falcon Manor Apartments when Gutierrez allegedly shot and seriously injured Helena native Lauren George, who was in the apartment.

During the Alabaster incident, Gutierrez, Searcy and then-Helena resident Michael Antonio Laforty allegedly stole marijuana from an Alabaster man while Gutierrez was armed with a revolver. No injuries were reported in the Oct. 31 incident, according to court documents.

As a result of a plea agreement, two of Searcy’s first-degree robbery charges were dropped.

Shelby Baptist to pay Alabaster, county ‘In lieu of taxes’