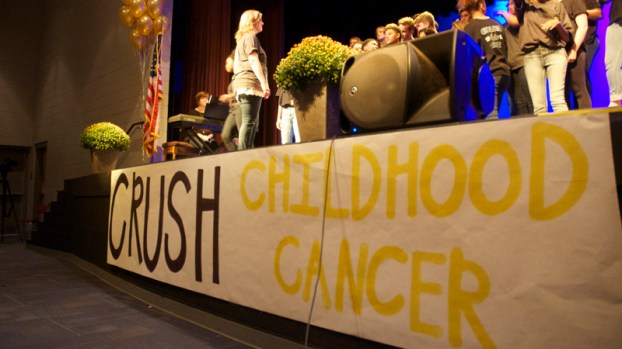 Chelsea High School students had an assembly on Friday, Sept. 30, to celebrate raising awareness for childhood cancer, as well as raising a total of $4,000 they would split between two non-profit organizations. (Reporter photo/Alec Etheredge)

CHELSEA – Students at Chelsea High School have gone above and beyond to raise awareness and money for childhood cancer.

Students along with English teacher Kelli Parramore, whose daughter Kenna has been battling acute myeloid leukemia, bonded together and thought of ways to help.

Therefore they created a T-shirt that reads “Go Gold” on the front and on the reverse side says “Our lives begin to end the day we become silent about things that matter,” a saying made famous by Martin Luther King Jr.

They sold these shirts to not only raise money, but also spread awareness about pediatric cancer, and at a special assembly on Friday, Sept. 30, the school reflected on the job the students did and presented two separate checks of $2,000 to two non-profit organizations.

One of the checks was presented to aTeam Ministries, which is an organization committed to offering spiritual, financial and emotional support to families dealing with pediatric cancer.

“Everybody that was wearing these t-shirts, they’re making an impact and if they don’t think they are making an impact they are,” said aTeam Ministries President Andy Thrower. “One of the greatest ways you can honor a cancer family or a physician that dedicates their life to this is by helping raise awareness.”

This touches close to Thrower’s heart. His family is one of the many families suffering from pediatric cancer as his son was diagnosed with leukemia at 16-months-old. His son is in third grade and doing well for now, but the support like this is much needed.

The other check was presented to Dr. Kimberly Whelan of Children’s Hospital, who has dedicated her life to treating pediatric cancer.

“These guys inspire me, not only to be able to put forth so much effort and time, but to raise awareness,” Whelan said. “The more people that know about childhood cancer, the more money we can raise and the more cures we can find. What they have done inspires me not only as a cancer doctor, but as a mom of two kids.”

The assembly saw the show choir sing songs that talked about being grateful and finding peace, which featured two solo singers. Both songs led to loud applauses and had high school students on the verge of tears.

Patrick Marshall, who is a senior in the peer-helping program, produced a video that showed the struggle facing childhood cancer. During the video he went around and asked nurses and others if they knew what the gold ribbon stood for when it came to cancer.

The consistent and staggering response was no.

“I just started thinking of the best way to advertise and knew making a video for social media would really get the point across,” Marshall said. “I just wanted to incorporate some facts to help spread awareness.”

This goes to prove that the unawareness of pediatric cancer is why only four percent of all money raised for cancer goes toward this cause, something that each speaker reiterated must change.

Out of the four parents and the one doctor that spoke they all said the same thing, “This may by childhood awareness month, but my family has to live with this for the rest of our lives.”

One of those that reiterated this point was Christina Nelson, whose daughter, Ally, is a junior at Chelsea High School and a two-time cancer survivor.

“I never thought I would be labeled as a cancer momma,” Christina Nelson said.

That changed when her daughter started limping out of the blue several years ago and Ally was ordered to have an MRI.

The MRI showed that Ally had osteosarcoma and a tumor had surrounded the entire bone of her leg. This cancer normally causes the loss of a limb, but she eventually got through it with a prostatic bone and went into remission. The cancer would eventually come back to effect her lungs later down the line, but she would also survive that.

“My one year old builds lego hospitals now because we’ve spent so much time in Children’s Hospital,” she said. “I don’t think these kids realize what they have done, they have raised awareness for a cancer that only receives four percent of the funding for all cancer.”

It was an emotional sight and several people were choked up during the ceremony including Parramore, who said she was sitting on the stage crying the entire time.

Opinions are something that journalist try not to express in their writing, but well done Chelsea High School, you are giving hope to so many and bringing awareness to a special issue. 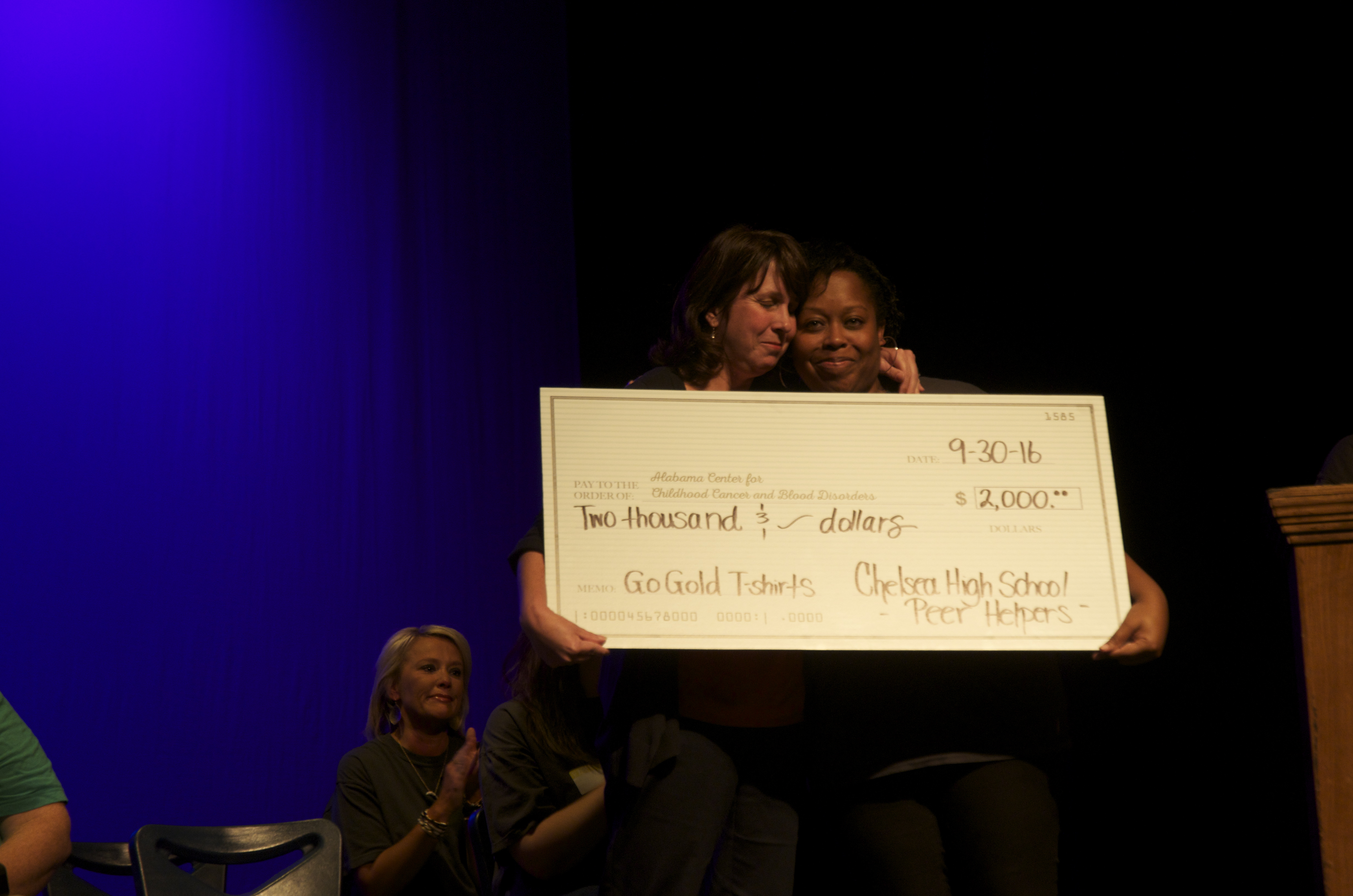 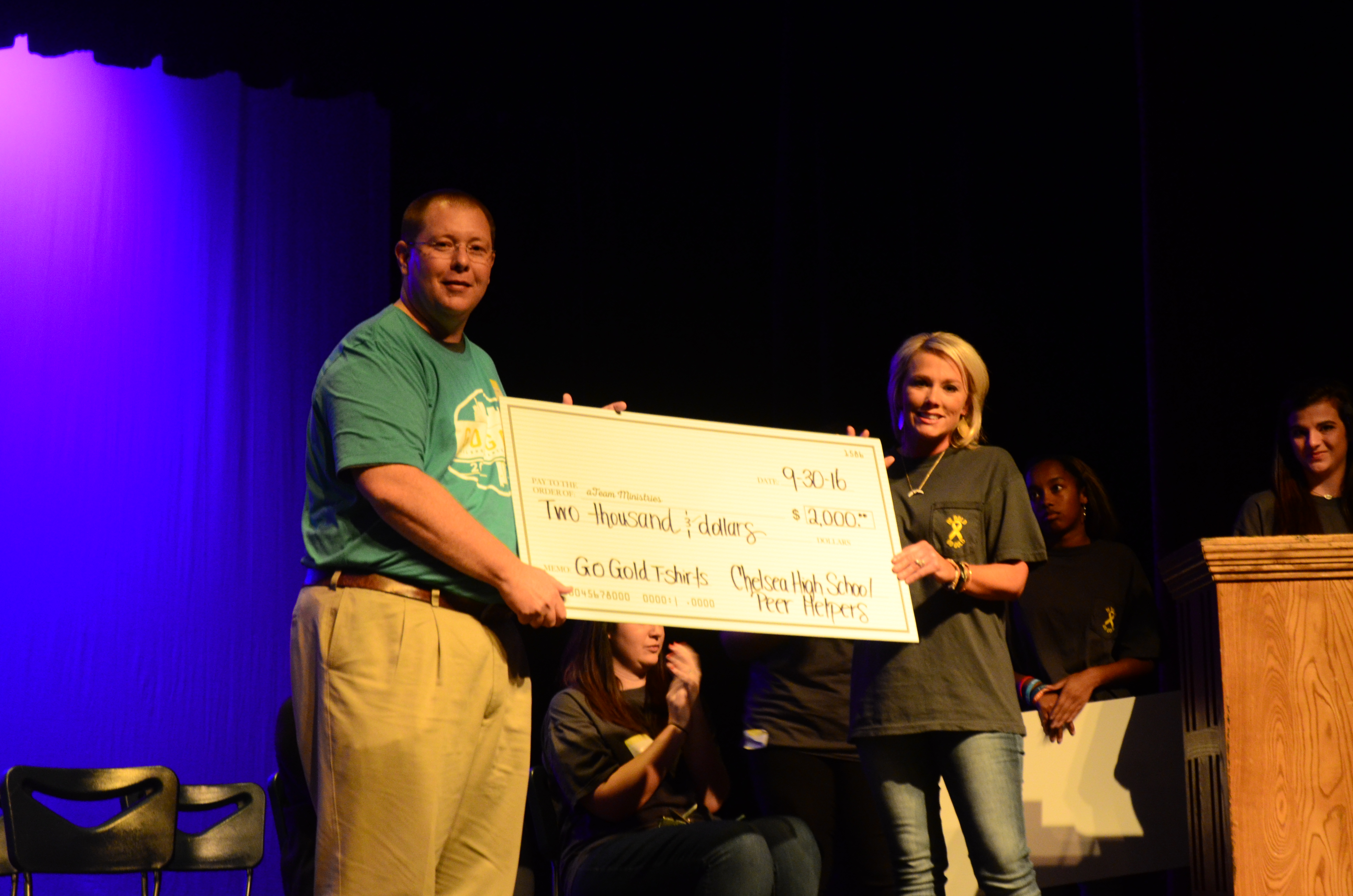 Demolition of ice arena under way

By BRIANA HARRIS / Staff Writer PELHAM – The city of Pelham is ripping out the entire main ice rink... read more