Demolition of ice arena under way 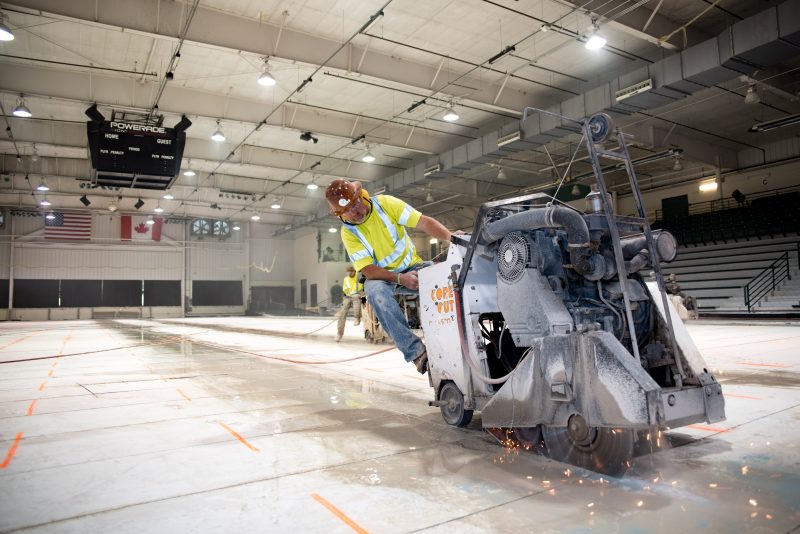 A worker cuts into the concrete slab that was under the ice in the main arena. The main ice rink must be demolished to fix a glycol leak. (Reporter photo/Keith McCoy)

PELHAM – The city of Pelham is ripping out the entire main ice rink located in the Ice Arena to fix a glycol leak underneath the ice that was discovered about a month ago.

Danny Tate, facilities manager of the Pelham Civic Complex and Ice Arena, said he originally thought the leak was located under the practice ice rink, but after conducting tests he learned the leak was under the main ice rink, which is 19 years old.

At a Sept. 19 meeting, the Pelham City Council declared the ice rink as being in need of emergency repair so that action could be taken immediately to fix the leak.

Underneath the ice’s surface is a concrete slab followed by 13 to 15 miles of pipes, and then 4 inches of expanded polystyrene, which is the final layer before another 5-8 inches of pipes, where the leak is located.

“The leak is located in the final layer before you get down to the dirt,” Tate said.

Tate estimated the repair will cost the city about $450,000, but he said the city won’t know for sure until the bids are opened.

To help save money, most of the demolition is being done by the city, but an outside contractor will be brought in to cut the concrete slab underneath the ice. City crews started working Monday.

Tate said it is still unclear how much it will cost the city to complete the demolition. He said it’s likely the city will work with the Shelby County Commission to get needed equipment.

“We’re still figuring everything out, but the county has always been very helpful and have assisted us before with projects,” Tate said.

Tate said the goal is to have ice back in the main arena by mid-December. The University of Alabama and UAB hockey clubs play all of their home games at the main arena. Both clubs play their first home game on Oct. 7.

Tate said he is in constant contact with both universities to ensure that their needs are still met during the repair process. He said home games for both teams will be played at the practice arena.

The annual Christmas Tree lighting, which usually happens at the end of November, will still take place at the main arena but there will not be ice on the floor. Ice-skating will be at the practice arena.

“I was really scared when we found out because I thought it would damage some of the relationships we’ve built, but that hasn’t been the case,” he said. “Everybody involved in the process has been so wonderfully supportive of the process we’re going through.”

Once repaired, the main arena will have a lifespan of 25-30 years. Tate said when the arena was built 19 years ago it wasn’t done correctly by the contractor.

“They didn’t do the best work, which is probably why the business is shut down now,” he said. “It’s no fault of the city because folks just didn’t know they weren’t doing good work.”

The same company also installed the ice rinks in Decatur and Huntsville. Huntsville has already had to fix their rink. At the time, the Huntsville rink was 17 years old.

Despite the setback, Tate said the Pelham Civic Complex and Ice Arena is experiencing a lot of growth. Tate said the ice arena’s adult hockey league is “exploding” and the figure skating program has remained very popular. The rink has also seen an increase in birthday parties and leisure ice-skating.

Tate said he has to turn away those wanting to rent the civic center banquet hall because a lot of dates have already been reserved.

“We’ve found our niche at the Civic Complex – we do a lot of continued education courses, luncheons and receptions,” he said. “We have a good idea of what we’re best suited for. There’s so many things going the right way and we can’t let this throw us off track.”