NORTH SHELBY – The Oak Mountain Eagles were unable to overcome Hoover’s offensive onslaught on Sept. 30, as the Eagles fell to the Buccaneers 49-6 in a Class 7A, Region 3 matchup.

“We’ve got to regroup. We’ve still got everything we need to play for in front of us,” said Oak Mountain head coach Cris Bell. “If we win out, we’ll end up with the number two (playoff) seed, and that’s a whole lot to play for.

“We didn’t play particularly well tonight, and I coached even worse,” he added. “We’ve got to pick up the pieces and move forward.” 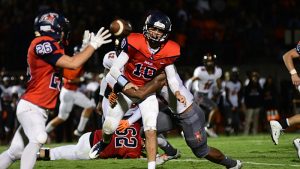 Oak Mountain quarterback Jackson Kimbrell (10) passes as he is hit to Daniel Salchert (26) during the Eagles’ 49-6 loss to the Buccaneers on Sept. 30. (Reporter Photo/Neal Wagner)

Hoover (5-1, 4-0) lit up the scoreboard first when quarterback Garrett Farquhar connected with receiver Kam Ford on a 46-yard touchdown pass with 7:31 remaining in the first quarter. Barret Pickering added the PAT to put the Bucs up 7-0.

After recovering an Oak Mountain fumble, the Bucs scored again when running back R.J. Randle sprinted 10 yards for a touchdown. Pickering’s extra point gave the visiting team a 14-0 lead midway through the first quarter.

The Eagles (2-4, 2-2) scored their only points of the game when quarterback Daniel Salchert connected with Luke Percer for a 33-yard touchdown with 3:18 remaining in the opening quarter. Bick Carney’s PAT attempt sailed left, bringing the game to 14-6.

Hoover then answered by reeling off 35 unanswered points to seal the victory.

The Buccaneers ended the night with 404 yards of total offense, while Oak Mountain racked up 236. Hoover averaged 8.6 yards per play on the night.

Salchert finished the game perfect, connecting on two of two pass attempts for 35 yards and a touchdown. Jackson Kimbrell connected on 4-or-11 passing attempts for 14 yards.

Salchert and Kimbrell were also the Eagles’ rushing leaders, racking up 84 yards on 16 carries and 61 yards on 18 carries, respectively.

Percer led the Eagles in receptions on his touchdown catch, ending the night with 33 yards on one reception.

The defensive leader for Oak Mountain was Jackson Murphy, who recorded four solo tackles and an assist during the game.