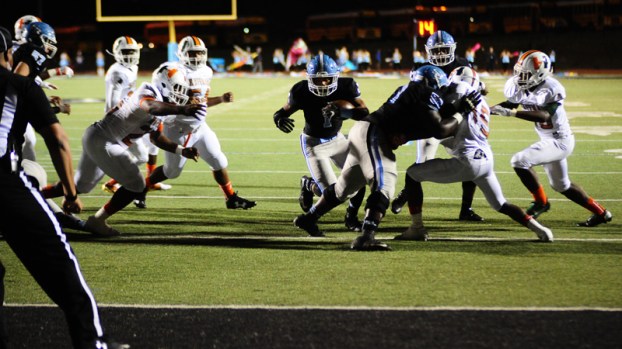 Spain Park’s D’arie Johnson rushes for a touchdown in the second quarter of a win over Huffman on Sept. 30. (Photo by Stephen Dawkins)

HOOVER – For a team coming off an appearance in the state championship game and with high expectations for this season, going almost a month without winning a game can feel almost surreal.

Spain Park returned to normalcy with a 42-6 win over Huffman on Sept. 30 after back-to-back losses and a bye in consecutive weeks.

“They did everything I challenged them to do,” coach Shawn Raney said about his team’s impressive performance.

The Jaguars (4-2 overall, 2-2 Class 7A, Region 3) never let their visitors feel like they had a chance, scoring touchdowns on each of their first four possessions while holding the Vikings (3-3, 2-2) to just one first down in that span.

Huffman had opportunities but hurt itself with penalties and miscues, such as a receiver dropping a pass while wide open that would have been a big gainer, and a long completion negated by a flag—both on the Vikings’ first possession.

Jalen Henderson scored first for SPHS, breaking a tackle in the backfield then sprinting into the end zone from four yards out with 3:36 remaining in the first quarter.

Cole Starr was good on the point-after, as he was on the next five.

Henderson rushed for a team-high 84 yards on 10 carries.

Next it was Larry Wooden’s turn to score, on a one-yard run just seconds into the second quarter.

After another three-and-out forced by the Spain Park defense, Braxton Barker entered the game at quarterback in place of starter Hunter Howell, and promptly led a touchdown drive that included a third-down conversion completion to Thomas Jordan and was capped by a four-yard run by D’arie Johnson.

Raney said the playing time was intended as a reward for Barker, whom he called a hard worker who continues to improve.

“It’s such a healthy competition between (Howell and Barker), it won’t affect our team,” Raney said.

Howell, back in the game at quarterback, connected with Jordan for a 59-yard touchdown pass with 3:22 on the clock in the second quarter.

Barker made it 42-0 when he drilled a pass in to Michael Allen in the end zone from the 10-yard line with 1:53 left in the third quarter.

Barker was five-for-six passing for 82 yards.

Huffman got on the scoreboard on an 11-yard pass from Anthony Wiggins to Michael Barber with 7:39 left in the game.

Spain Park visits Thompson on Oct. 6 for another region contest.

Bulldogs move to 6-0 after road win

Montevallo remains unbeaten in the 2016 season after a 32-14 win at Greene County on Sept. 30. First-year coach Brandon... read more