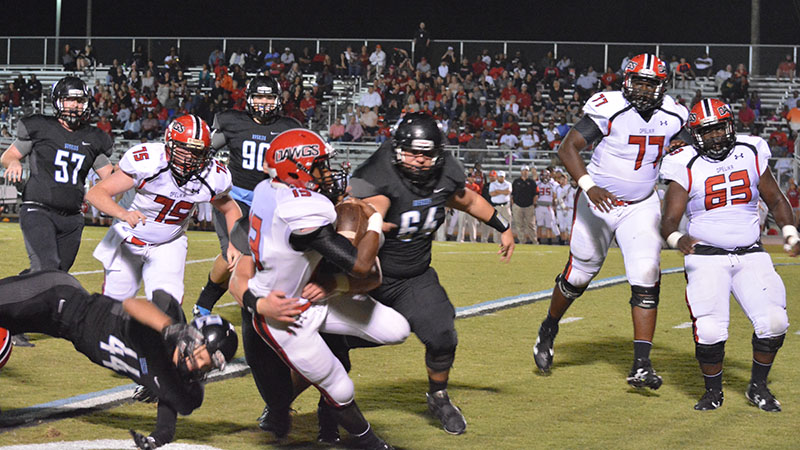 The Helena defense attempts to tackle Opelika running back Conner Smith (13). The Bulldogs defeated Helena 36-7 in a region game on Friday, Sept. 30. (For the Reporter/Brian Vansant)

HELENA–After fumbling the ball near the goal line to open the game, Opelika rebounded with ease as the Bulldogs took care of Helena 36-7 on the Huskies homecoming night on Friday, Sept. 30, to further secure their spot at the top of the Class 6A Region 3 standings.

After the early hiccup, Opelika once again moved the ball deep into Helena territory on its next offensive possession and Bulldogs quarterback JD Worth found receiver Jaleel Heard in the right corner of the end zone to put Opelika up 7-0 with 4:26 to go in the first quarter.

Helena was able to move the ball at times offensively but didn’t get on the scoreboard until late in the fourth quarter as Huskies quarterback Lawson Peoples started for the second straight game in place of injured starting quarterback Riley Davis.

Opelika’s second touchdown of the game was a mirror image of the first as Worth connected with Heard again from 11 yards out in the right corner of the end zone as the Bulldogs extended their lead to 14-0 at the end of the first quarter.

In the second quarter, Worth found the end zone again but this time on a 4-yard designed quarterback run to put Opelika up 21-0.

Opelika kicker Austen Blackmon added a 22-yard field goal late in the second quarter and the Bulldogs took a 24-0 lead going into halftime.

In the third quarter, Blackmon had the only points scored for either team as he connected on a 32-yard field goal at the 5:46 mark. Opelika took a 27-0 lead into the final quarter.

In the final quarter, Opelika recorded a safety as Helena was called for intentional grounding in the end zone to make it 29-0.

The Helena offense came alive late in the fourth quarter down 36-0 as Helena drove the ball 73 yards in 14 plays and capped off the drive with a 2-yard touchdown run by Huskies running back Devan Walker to make it 36-7.

Helena’s late touchdown was the first touchdown the Opelika defense has allowed to a region opponent so far this season.

With the 36-7 victory, the Bulldogs offense has now scored at least four touchdowns in 21 consecutive regular season games dating back to the 2014 season and has now won 35 consecutive games when scoring 30 points or more.

Helena head coach Watt Parker knew the game would be a tough challenge but in the end he knew his team gave it everything they had.

“We knew going into the game how good they were and I just challenged the guys,” said Parker. “No matter what, you play and live in the moment and play that play and I’m very proud of them. We had a lot of guys stepping into positions that is not their position and stuff like that and we played our guts out. Sometimes the other team is just a very good team and tonight they were definitely the better team than us. But I’m so proud of our guys because they never lost their composure and never stopped battling and that’s what we want to be about.”

With the loss, Helena dropped to 2-4 on the season and 1-2 in region play.