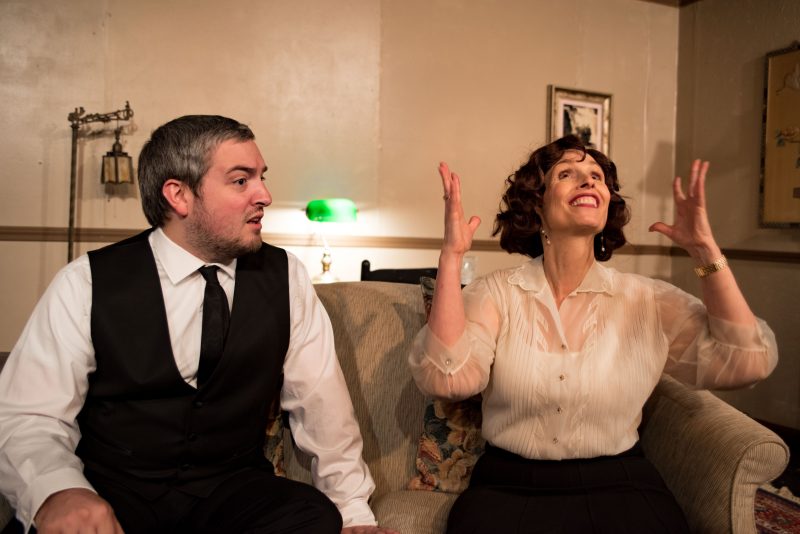 Two main characters in the production, Design for Murder, act out a scene. (Reporter photo/Keith McCoy)

Design for Murder is a classic 1930s murder mystery that’s sure to be full of old-time charm and intrigue, said Director Emily Hoppe.

“Audiences will definitely see some action in regards to the murder,” Hoppe said.

After the opening performance, guests are invited to stay for a free Halloween-themed reception with food and drinks.

Hoppe said the cast and crew began rehearsing immediately after auditions in late August. The 10-person cast has a mix of talent, from a high school student to the lead actress who has decades of experience.

Lead actress Lisa West plays the Celia Granger, a high society, lady-of-the-house type who has fallen on hard times in the midst of the Great Depression.

“She has many layers and she’s a fascinating character,” said West, who started putting on plays in her family’s garage at the age of 7, charging 25 cents for admission.

West said her passion grew from there. She has performed in productions in Connecticut, Kentucky, Maryland and Georgia to name a few.

“This is a marvelous group to work with,” she said. “The space is so intimate and you really get to connect with the audience.”

Hoppe said the goal of any show is the same.

“I want this play to provide whatever the audience wants it to provide,” she said. “If you want to be entertained, then I hope we entertain you. If you’re looking for a way to escape the problems of life, then I hope that we are able to transport you to a different time and place.”

There will be multiple opportunities to see the play from Oct. 7-15. Admission is $16 for adults and $13 for students and seniors. For show times and dates go to SouthCityTheatre.com.