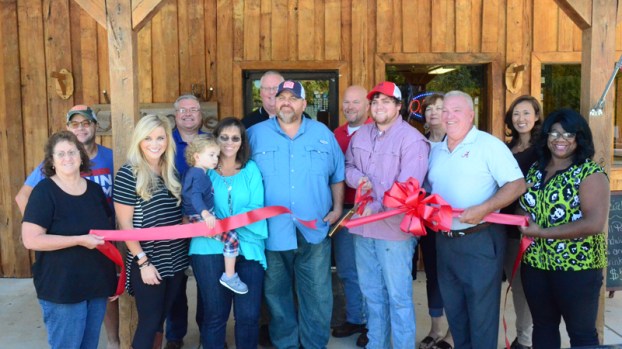 Tin Top Bar-B-Que got its start in the city of Calera and had so much success with their homemade food that owner Mike Gannon’s son Chase said he wanted to go into the restaurant business, which led to the opening of their new barbecue joint.

The restaurant has been very popular among Columbiana residents as well as others since opening its doors on March 1 of this year, a sight that Mayor Stancil Handley has been very pleased to see.

“I think everybody knows that we are thrilled from a city aspect and a Handley aspect that the Gannon’s have done this,” Handley said. “This is the type of business that we want to see in Columbiana and the city will support them in everything they do.”

Tin Top offers not only some of the freshest barbecue around that you can get on a plate, on a sandwich or even covering chips or fries, but they also offer a huge cheeseburger and other favorites like chicken tenders.

“Nothing is pre-made in our restaurant,” Mike Gannon said. “It’s all made every morning.”

The restaurant has also recently started serving breakfast shifting their hours to be open from 6 a.m.-7 p.m.

“One of our goals has been to rejuvenate our businesses and our restaurants,” Handley said. “We want to be a welcome space and have places that make people want to pay a visit to Columbiana.”

The restaurant is located at 121 Old Highway 25 in Columbiana.

“We’re excited to be in Columbiana and it’s just nice to be close to home,” Chase Gannon said.