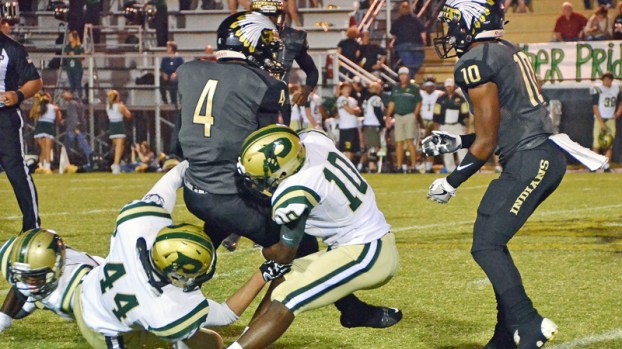 The Pelham defense stops a Wetumpka ballcarrier during a Sept. 30 contest. (Photo by Cory Diaz)

By CORY DIAZ / For the Reporter

With the Panthers offense outgaining the Indians, 313 to 235 total yards, DeAndre Williams returned the opening kickoff for a touchdown and Nick Turner took an interception back for a score to help Wetumpka pull away from Pelham, 35-10, at Hohenberg Field.

Williams split the coverage for a 98-yard kickoff return, and capped the Tribe’s next possession with a 4-yard touchdown, putting his team ahead, 14-0, less than six minutes into the Class 6A, Region 3 contest, but WHS couldn’t take control.

“Offensively, I don’t know if I did a great job in play selection tonight,” Wetumpka head football coach Tim Perry said. “We drove the ball on them at times, we just didn’t finish, which is kind of uncharacteristic of us.”

In the first half, the Panthers’ read-and-pitch option attack gave the Indians fits. Pelham (1-6, 1-3) chewed up 156 yards on five drives, the first resulting in a touchdown on a 2-yard power run on fourth-and-goal from Jon Drake, cutting the lead to 14-7 with 2:31 remaining in the first.

Lopez and WHS senior placekicker Tyler Loza traded missed field goals the rest of the first half, as Wetumpka took a 14-10 lead into the break.

“An option offense is very difficult to defend,” Perry said. “You don’t see it a lot and it’s very difficult to simulate in practice. There’s no way you can simulate the timing between the mesh on the dive, the quarterback pulling and the pitch. They’re a very good team; their record doesn’t reflect the quality of their team.”

At halftime, the Tribe adjusted to bring in cornerbacks senior Jamarcus Townsend and junior Trey McCreary in on run and pitch help, a move that proved fruitful, as the defense picked off three Matthew Rye passes, including Turner’s 70-yard interception return for a score with 7:03 left in the game. It was the junior safety’s fourth pick on the season.

The senior running back ended the night with 14 carries for 93 yards.

Turner’s interception return extended the Tribe’s lead to 28-10, and junior running back Kavosiey Smoke found pay dirt from 3 yards out on WHS’s next drive. Smoke had 15 rushes for 77 yards.

By ERIC STARLING / For the Reporter ALABASTER – The Thompson Warriors and the Vestavia Rebels have been playing each... read more