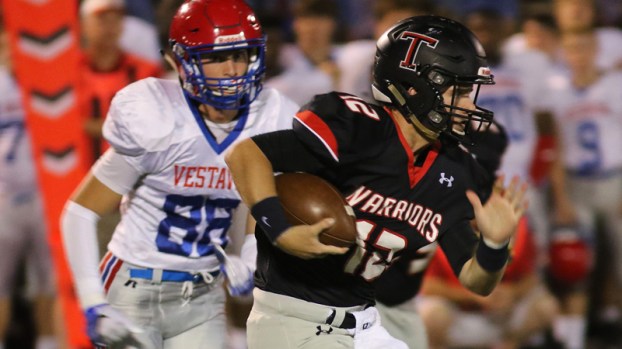 Thompson quarterback Josh Huner looks for running room in a win over Vestavia Hills on Sept. 30. (Photo by Eric Starling)

ALABASTER – The Thompson Warriors and the Vestavia Rebels have been playing each other since 1982, with the Warriors winning six of the first seven contests.

Since that time however, the Rebels have dominated the Warriors, winning the last 14 contests.

On Sept. 30, the Warriors would dig deep and with a great team effort, end that streak with a 17-10 victory.

“This was a great win for not only our kids but also for our coaches,” coach Mark Freeman said. “They have worked hard this week to prepare to face a well-coached Vestavia team. We emphasized to our kids to find joy in every game.”

Senior kicker Logan Brown got Thompson on the board early with a 21-yard field goal as time ran down in the first quarter.

On Vestavia’s next drive, they converted on a critical fourth-and-six at the Thompson 26-yard line. Three plays later, Toliver Chatwood carried it in from the 5-yard line, and the extra point gave the Rebels the 7-3 lead.

With both teams struggling to get much on offense in the first half, it would be the defense/special teams for the Warriors that would come up big.

With Vestavia punting on fourth-and-20 from near mid-field, the Warriors’ Austin Davis blocked the Rebel punt and Chris Lewis returned it for the touchdown. Brown’s extra point made it 10-3 Warriors.

With 26 seconds remaining in the first half, the Rebel drive stalled, but Manraj Singh nailed a 40-yard field goal to tie the game going into the half.

The only score in the second half would come from the Warriors’ first drive in the third quarter. Starting with a short field at the Rebel 38-yard line, Shadrick Byrd took three straight hand-offs from Josh Huner and moved the ball to the Rebel 25.

From there, Huner dropped back and found a diving Sam Holmes in the corner of the end-zone for the score.

Brown capped it off with the point after, and the Warriors had all it would take to come away with the win.

Huner finished the night 8-for-11 passing for 143 yards and a touchdown.

Byrd led all rushers with 59 yards. The Thompson defense was led by Nick Mobley with eight solo tackles, and Myles Brown with two interceptions.

With next week’s game against the Jaguars of Spain Park coming on Thursday night, Freeman and his staff will have to back everything up and get started on Sunday with preparations for the week.

With a big region game coming this week against Hoover, can Oak Mountain keep its’ hot streak going? (File) By... read more