COLUMBIANA – A 34-year-old Alabaster man is facing up to 10 years in prison after police arrested him on Sept. 27 and charged him with sexually abusing a victim in July. 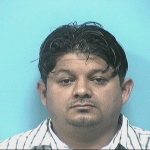 The Alabaster Police Department arrested Cesar Wilfredo Navarro-Abarca, who lists an address on Mangrove Drive in Alabaster, on Sept. 27.

The arrest came seven days after a Shelby County grand jury indicted him on one count of first-degree sexual abuse.

Navarro-Abarca’s arrest warrant claimed he allegedly did “intentionally subject (the victim) to sexual contact by forcible compulsion” on July 11 of this year.

Navarro-Abarca was released from the Shelby County Jail the same day he was arrested after posting a $60,000 bond, according to Shelby County District Court documents.

The suspect is now set to appear in front of District Court Judge Lara Alvis for a preliminary hearing on Nov. 28 in the Shelby County Courthouse.