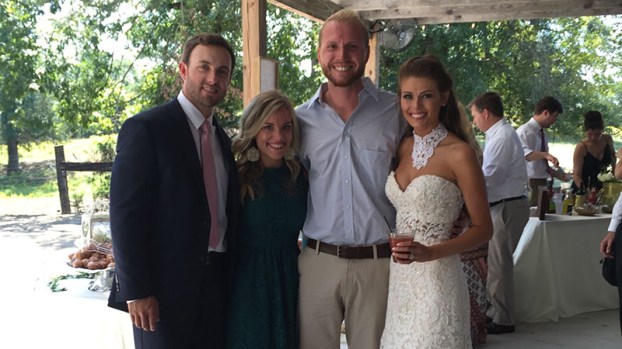 From left, Collin Varallo, Amy and Jamie Griffin of Griffin Farms and Kelsey Smith pose for a photo the day of the Varallo’s wedding at the farm on Sept. 5. (Contributed)

HELENA–Griffin Farms of Helena played host to some special wedding guests on Monday, Sept. 5, as the business continues to grow as a popular wedding and birthday party destination on the nearly 160-acre farm located off Shelby County 17.

Smith and Varallo starred in season 4 of “Sweet Home Alabama,” which aired in January 2014.

In season 4, a number of different city guys and country boys tried to win over the heart of Smith, who eliminated more guys each week until she finally chose Varallo, a Birmingham native.

Smith, a native of Tuscaloosa who modeled in Los Angeles, chose Varallo and the two became engaged during the Christmas holiday in December 2015.

Amy Griffin, who runs Griffin Farms with her husband Jamie, described how the couple decided to book their wedding at the farm.

“He proposed around Christmas this past year and since then they’d been trying to figure out when and where they were going to get married,” said Griffin. “Kelsey’s mother was on Facebook and came across our Talk of Alabama segment, watched it and saw some of the wedding pictures and called me. About 15 minutes into the conversation she said did you ever watch that show ‘Sweet Home Alabama?’ and I actually did and I made my husband get into it with me and watch it.”

Varallo and Smith were married on Sept. 5, at Griffin Farms which included a brunch ceremony at 10:30 a.m.

The two took pictures and did a first look at sunrise on the farm, and a reception was held at Griffin Farms’ covered patio with approximately 150 guests.

Griffin said it was a neat experience to open up their home to Smith and her bridesmaids the morning of the wedding so they could do hair and makeup.

“We did open up our house to let them get ready and she (Smith) is a makeup artist, so at 4:30 that morning they were in our house doing makeup and hair and it felt like we were a part of this production so that was pretty cool,” said Griffin.

Griffin said the farm is constantly being booked for weddings and parties after starting the business in 2014.

For more information or to book an event with Griffin Farm Parties, visit Griffinfarmparties.com or call 541-8150.

Griffin Farms is located at 6027 Shelby County 17 in Helena.

By CHRIS MEGGINSON / For the Reporter COLUMBIANA – Evangel Christian School shut out the Cornerstone Chargers in the second... read more