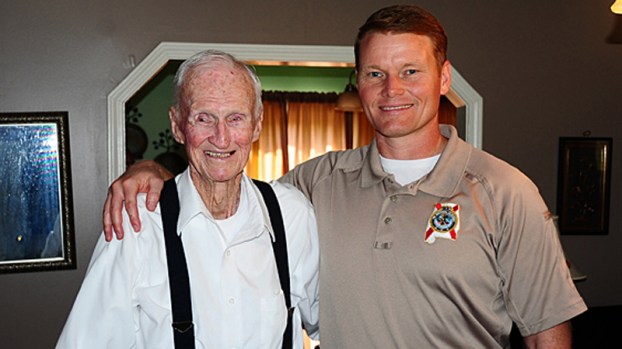 Nathan E. Smith Jr. of Columbiana, passed away on Sept. 30, as a Purple Heart recipient and proud of his faith, he will be remembered fondly by many. (File)

Smith, born on Dec. 15, 1923, didn’t live your ordinary life. He was a member of the U.S. Marine Corps in World War II where he fought for this country until an injury in Iwo Jima.

After his fighting days were over he got involved in several illegal activities and eventually became involved with the mafia as a bookie, which led to him being investigated by the FBI.

It was through all of this turmoil in his life, hitting complete rock bottom, that led him to finding his faith in the Lord and completely altering his life.

It only took one dinner with his son to realize that everything he had done was in his past, but what he was seeking to cure him was still ahead.

“My son started telling me how he had invited Christ into his life,” Nathan said in an interview in 2015. “After hearing that, I couldn’t wait to get back to my apartment and invite Christ into my life.”

Ever since that dinner at the age of 52, Nathan led a completely different life.

“Everything he has done from 52 to now has been led by Christ,” said Shelby County Deputy Chief and retired Marine Chris George. “For the first 52 years he dealt with all of those things, but went through a total transformation.”

The 92-year-old went through darkness both in war and life, but turned everything around to become a role model for so many people, a man for people to look up to and say, “If he can do it, then I can do it.”

“You’ve got 450 people in the Shelby County Jail who think they’re lost,” George said. “All is not lost if you give it all to God. Nathan is a testament to that.”

Smith wasn’t just a sergeant in the Marines, but was awarded a Purple Heart when he was wounded in Iwo Jima. He had many other accomplishments throughout the war as well, including a Silver Star.

One could argue, and even he might tell you, that those accomplishments were great, but the man he was able to become after turning his life around, and the influence he had on others may be his biggest accomplishment of all.

“He used to say, ‘I was the chief sinner in Birmingham, but when Christ came into my life, it changed all that,’” said Smith’s wife Patricia. “It tells people that you can always make a change. It’s never too late.”

In 2015 Smith said, “My thought used to be ‘How can I scam people?’ Now it’s ‘How can I tell them about Jesus?’ It’s a complete reversal from the way I used to be.”

Today is a day for remembrance of Mr. Smith and nobody will remember his weaker days, but instead will remember the man he became over the last 52 years of his life and the people he impacted with his newfound love for the Lord.

Smith was laid to rest on Monday, Oct. 3, at the Alabama National Cemetery and is survived by his wife Patricia Smith and children Shirley Smith Hyde, Howard Smith and Rebekah Smith.