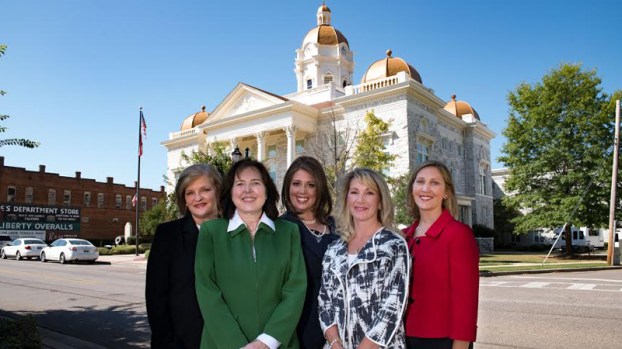 From left, Jill Lee, Mary Harris, Lara Alvis, LeAnn Rigney and Allison Boyd have all taken power positions within the Shelby County Courthouse. Each one is a shining example of how to be a role model and chase your dreams. (Reporter photo/Keith McCoy)

The Shelby County Courthouse has served the county for more than 100 years, and has seen many changes and new additions to adapt to change.

All of these women have worked hard to get where they are, but all said they are now in roles none of them expected to be.

It takes a strong person to see and deal with what they deal with on a daily basis such as death, violence, drug and alcohol addiction, kids throwing their lives away, mental illness, families being ripped apart and locking people away.

Almost all of them teared up when talking about the most difficult aspects of their jobs, but they all said that’s what makes their job so great.

They hold positions of power that require much responsibility, and each one said they are thankful they were considered qualified enough to handle that.

Lets take a closer look at why each of these women of the courthouse is a role model for not only young women, but others as well. 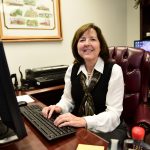 Mary Harris has walked the halls of the Shelby County Courthouse since Oct. 1, 1972, when at the age of 18 she was offered her first job after graduating from Thompson High School.

Harris said she never set out to be the circuit clerk, but her pathway to that position started when she graduated from Thompson High School.

She said she her adventures in the courthouse started when her future boss asked her PE teacher for recommendations on graduates. Harris’s name came up, and that led to her first job in the courthouse and eventually to becoming circuit clerk in 1995.

Harris described her job as being able to sue you, arrest you, divorce you, send you out of the country and assist you with voting. She said she doesn’t see herself moving on from the position anytime soon.

“I want to leave this place in much better shape than when I arrived. I love my job, and I couldn’t imagine leaving here to go somewhere else and work a job that I don’t enjoy,” she said.

Harris said she knows how important her job is and the impact it can have on future generations of women.

“When my daughter came along, I told her anything you want to do and anybody you want to be, I am going to assist you with that,” Harris said. “The only stipulation I gave her is that if you start something you have to finish it.” 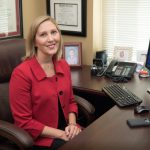 She started working at the Shelby County Courthouse in 2007 and has worked in several different areas, from mental health and drug court, to prosecuting crimes against children as the assistant district attorney.

In January of 2016 she was named legal and mental health coordinator for the Shelby County Probate Court by Probate Judge Jim Fuhrmeister.

This job entails her focusing in-depth on mental health issues and allows her to be the special probate judge, which means she hears all commitment and adoption cases.

“Adoption cases are by far the most fun part about my job,” Boyd said. “Seeing families brought together is a sight like no other. It may have been horrible situations that brought them to the adoption, but to see the love and happiness they have when they get the opportunity to make a family is unlike anything else.”

Boyd said she always wanted to be a lawyer growing up, and credited seeing her great aunt work as the registrar of deeds in Chattanooga as the starting point of her dream.

“I just love being in the courthouse and being able to help people,” Boyd said. “I have enjoyed so much as a special probate judge, it’s not really something I saw myself doing, but I love it because I’m helping people in so many different ways.”

Boyd has been married to Candler Boyd for 16 years, and the couple have two children: 8-year-old Carter and 6-year-old Lauren.

“Hopefully I can create for my daughter and her friends what I saw growing up,” she said. “My mom was in education growing up, she started out as a first grade teacher and did that for several years, but went back to school to get her doctorate so she could become a principal. That was her goal throughout her career. I just want to set the same example for my daughter.” 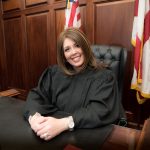 Lara Alvis started her long tenure in the Shelby County Courthouse as an intern with the district attorney’s office in 1998.

She has now worked her way up to being the first woman to ever serve as the Circuit Court Judge after being appointed by Gov. Robert Bentley to finish the term of Judge Daniel Reeves.

“That was a huge honor to be appointed,” Alvis said. “When you’re the first female, or really the first anything to do something, you don’t really have anybody to see how they acted or handled the situation.”

When asked how she balances the home life and work life she simply answered, “You don’t quite honestly.

“You always feel that you might not be doing enough for your family or your job, and that is a real struggle,” Alvis said.

The story of Alvis’ desire to become a lawyer goes back to her childhood, she said.

“I’m not sure what grade you do those papers in school that ask what you want to be when you grow up, but I always answered with ‘Be a lawyer,’” Alvis said.

Now that she is a judge, she said she feels as if being a role model is the most important aspect of her job.

“This is a job where everybody is always looking up to you and taking note of what you are doing, so I just want to do what I can to help those people realize their potential and be an example of the right thing to do,” Alvis said.

She considers the responsibility of her job to be more difficult to handle than the power.

“At the end of the day, in a death case, when you can override the jury, you contemplate those things a lot and lose a lot of sleep over it,” she said. “It is a huge responsibility to make the right and fair decision for everybody involved.”

Alvis said her position fosters a desire for her to make the right decisions and become a role model, especially for young women looking to chase after their dreams.

“Females have clearly taken more leadership roles at the courthouse, and I don’t think anybody can deny that,” she said. “I think anytime you do anything in a leadership role, whether you’re male or female, you have to remember that you are a role model to other people.” 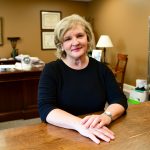 Thanks to shows such as “Law and Order,” Jill Lee has what many may consider the most interesting job in the courthouse: District attorney.

Her first job came as a law clerk in 1991 while she was in law school at Samford University.

She eventually returned to the courthouse in 1995, which led to her becoming the first woman to ever hold the position of district attorney in Shelby County when she assumed the role from former DA Robby Owens in 2014.

“Clearly that is significant, but most meaningful to me is that someone found me qualified as a person to do this job and serve the people of this county,” Lee said.

Unlike the other women at the courthouse, Lee said she didn’t know what she wanted to do for a long time.

Two credits away from earning her master’s at UAB in the spring of 1989, she sat down and had a conversation with her brother.

From that conversation, she decided she wanted to become a lawyer. Showing her determination, the next day she drew up her plan, and by the fall of 1989 she was attending law school.

She said when it comes to chasing your dreams, there’s one simple thing you can do, “Ask questions.”

“There’s always someone that can be there to help you achieve your goal,” Lee said.

Almost 30 years after talking with her brother, she is now serving as the top prosecutor for Shelby County.

“We’ve seen a lot of people go through tough times, both victims and defendants. For our victims it’s great to get that conviction for them, but it’s not the way you want to meet people,” Lee said.

She said seeing defendants making a changes in their lives after going through the legal system and helping victims through difficult times are the most enjoyable parts of her life.

“Many of these people are at their lowest point in life, and it is very sad,” Lee said holding back tears. “You feel like there is never enough you can do because you can’t bring people back or change horrible life events.” 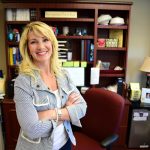 LeAnn Rigney has made a career of looking out for children as the chief Juvenile Probation Officer in Shelby County.

On a day-to-day basis, she has to deal with kids who have much potential, but throw it away due to drugs, alcohol, violence and other potentially life-altering decisions.

Rigney graduated from Chelsea High School in 1990. During her senior year there, she was the secretary to John Miller, who spent 30 years in the court system and ended up being Rigney’s predecessor.

“That’s actually when I came to love the job,” she said.

There was one story in particular about a young man that really stuck out to her. She said the child had an extremely rough childhood, but was extremely creative and artistic.

“I saw something in him and thought ‘If somebody would give him a chance he could do great things in this world,’” she said. “That’s when I made it my goal to help kids just like him.”

She returned to the courthouse in February of 2007.

“I knew from the moment I first worked in this office back in 1990 that this is where I wanted to be,” Rigney said.

Now she has her dream job as an administrator in the juvenile court system.

“It’s my nature to want to help. We see kids all the time that may break the law, but a lot of times when you peel that back and look at why, it’s because there’s something broken that needs to be resolved,” she said.

When asked why she gets so much enjoyment out of working with kids she gave a simple, but powerful answer, “They’re the future.”

“It’s obviously tough to see a kid pass away from overdose or other things, but the most difficult part of my job is not seeing the kids get it,” she said. “It can just eventually wear on you when they make poor decisions and don’t turn their life around.”

Her eyes filled with tears as she mentioned the role models who had helped her throughout her life when she was dealing with tough times. That is exactly what she wants to do for all of the kids she comes in contact with.

“To be able to give them the support they need to turn their life around is what motivates me to keep doing this,” Rigney said. “I never expected to be where I am today, but this is heaven for me.”

Colonial Pipeline Line 1 back in service

Pictured is a portion of the bypass pipe that helped restart Line 1 on Sept. 21. (Contributed) By GRAHAM BROOKS... read more