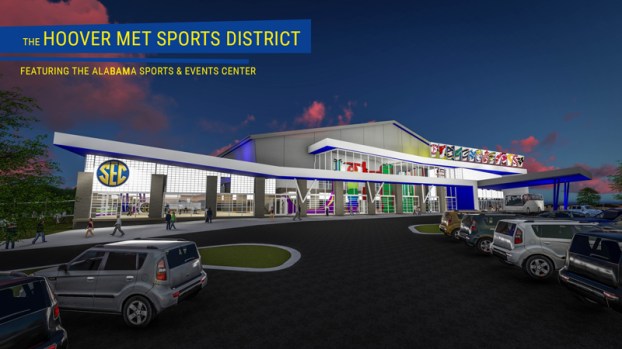 An artist's rendering of the Alabama Sports and Events Center was presented at a meeting of the Hoover City Council on Oct. 3.

The center will be called the Alabama Sports and Events Center—“the Bam” for short.

The name was unveiled during a meeting of the Council on Oct. 3 by representatives of Florida-based Sports Facilities Management, which will manage the center leading up to its opening and thereafter.

SFM also has a contract with the city to manage Hoover Metropolitan Stadium. The Met, along with the adjacent sports and events center, will collectively be known as the Hoover Met Sports District.

SFM used a group of youth wearing “the Bam” T-shirts and sunglasses to help unveil the name.

The pre-opening budget approved at the same meeting projects about $1.2 million in expenses leading up to the center’s anticipated opening in May 2017.

The budget approved by the Council also included projections for the first five years of the center’s operation.

The budget projects the center to operate at a loss for the first five years, though in a decreasing amount each year.

“We asked the management group to be as pessimistic as possible when preparing this,” Wright said.

Though the center is scheduled to open in May 2017, it will eventually include outdoor facilities, such as tennis courts, that will open later.

The Council also discussed the possibility of a 5,000-square foot “adventure center” that could include attractions such as a rope course that would be designed to entertain those at the center not participating in scheduled events—for example, a brother or sister of someone competing in a basketball tournament.