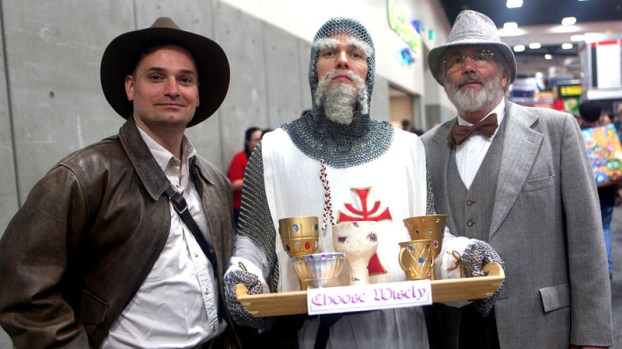 A costume contest, including participants such as these featuring the film “Indiana Jones and the Raiders of the Lost Arc,” will be held as part of the first Pioneer Con at Jefferson State Community College’s Shelby-Hoover Campus.

By AMALIA KORTRIGHT / For the Reporter

HOOVER – The first-ever “Pioneer Con” will be held at the Shelby-Hoover Campus of Jefferson State Community College on Fri., Oct. 14.

“I know that there are a lot of people who are interested in different aspects of science fiction, and there has definitely been a lot of interest in this event,” Sigma Kappa Delta sponsor Katie Boyer said.

The convention will consist of a series of panels on various topics related to science fiction, including a panel of the literary merits of science fiction from Jeff State faculty and a panel on dystopian literature from students.

A costume contest and a steampunk craft session will also be held.

Kyle Sullivan, creator and host of the “Trekspertise” YouTube channel, will serve as a guest speaker. There will be a movie screening, followed by a presentation from local film producer Ryan Kindahl. Birmingham-based author Lou Anders will also be featured as the keynote speaker.

According to Boyer, most academic conferences typically take place at four-year universities instead of two-year community colleges.

“We’re really hoping to give students a place to gather and share their interests and enthusiasm,” Boyer said. “Students who are working the panels have the opportunity to gain exposure and professional experience. We are also aiming to increase student involvement in extracurricular activities.”

Registration for Pioneer Con opens at 9 a.m. The first panel begins at 10 a.m.

The entrance fee is $15 for the general public, $10 for Jeff State students and $5 for members of Sigma Kappa Delta.

Presenters and panelists will be admitted for free.

The registration fee includes come-and-go access to all events and pizza for dinner. Anyone who pre-registers is eligible to win one of five graphic novel interpretations of a classic literary work.