COLUMBIANA–A 33-year-old Montevallo woman accused of allegedly stabbing a man several times and killing him in June 2016, has plead not guilty by reason of mental disease or defect, according to court documents filed at an Oct. 4 arraignment in Shelby County Circuit Court. 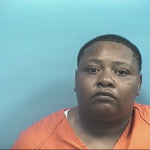 At 1:15 a.m. on Monday, June 6, deputies responded to the Almont Community, near Montevallo, on a report of a stabbing. Deputies found a male unresponsive and began CPR, trying to save his life.

Deputies took Smith into custody at the scene and later charged her with the murder of 40-year-old Keith Fulgham of Montevallo.

Smith was indicted on the murder charge on Aug. 26, which stated Smith “did on or about June 6, intentionally cause the death of Fulgham by stabbing him in the chest, head, abdomen and neck with a knife.”

If convicted, Smith could face up to life in prison.